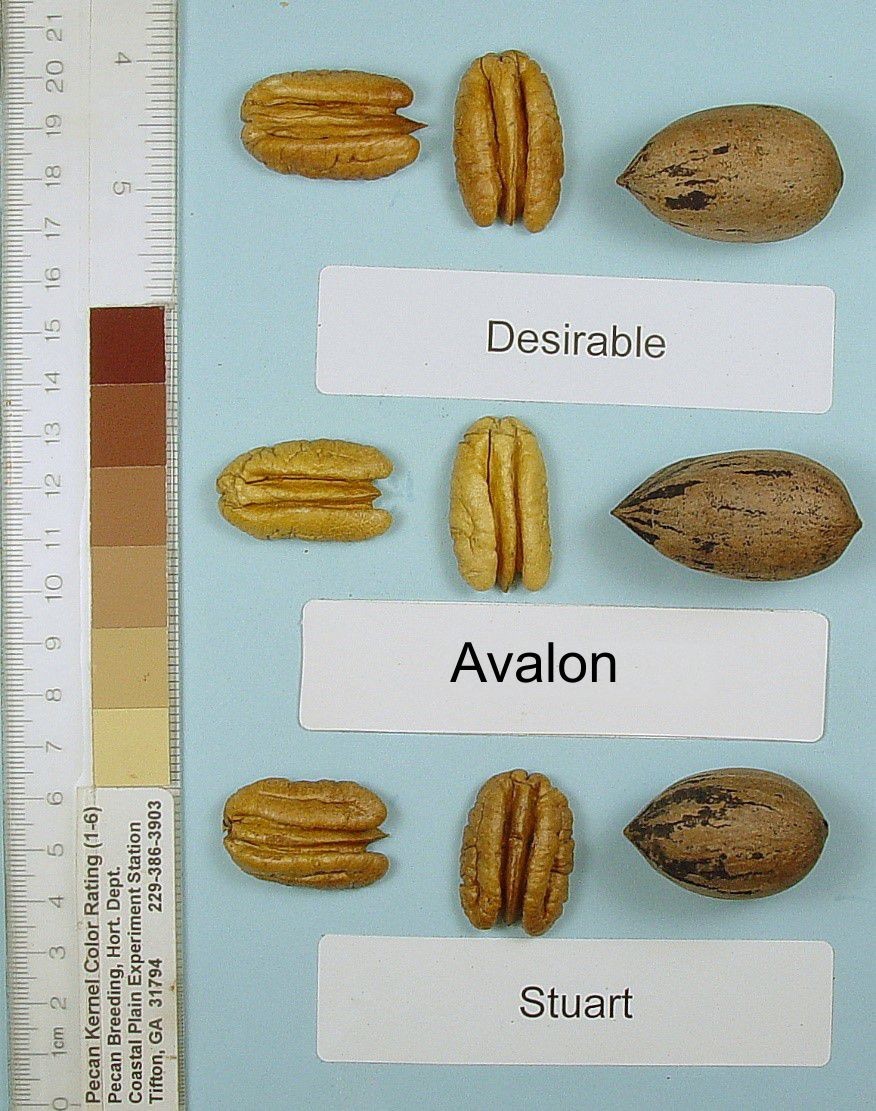 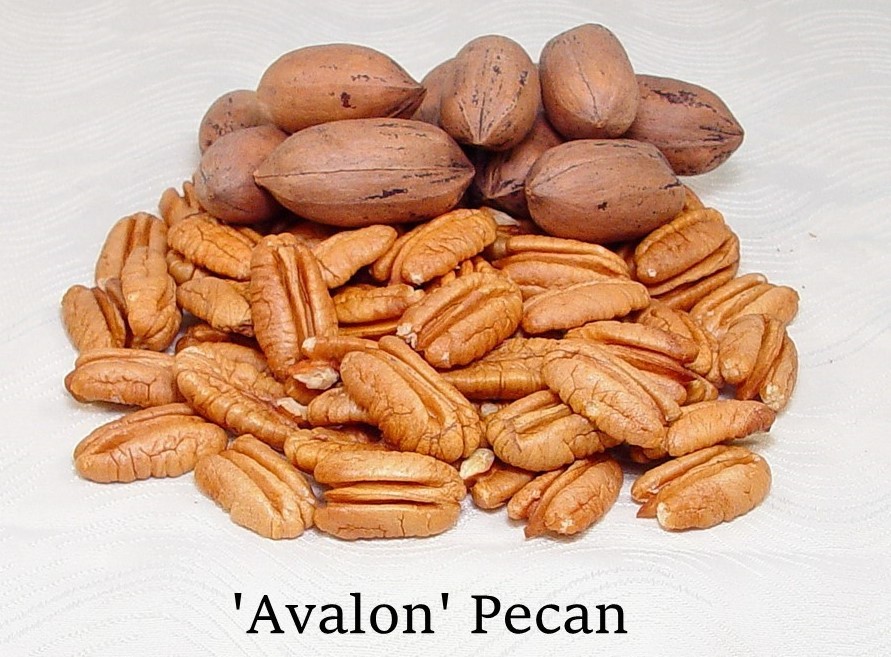 ‘Avalon’ was the first release of the Tifton-based UGA pecan breeding program.  ‘Avalon’ was selected as Ga. 00-7-75 from a cross of ‘Gloria Grande’ x ‘Caddo’.  ‘Avalon’ was selected for its high levels of scab resistance, even bearing, and commercially acceptable nut size and quality.  ‘Avalon’ is patented by UGA and is being sold by licensed nurseries in the southeastern U.S.  More information can be found in the HortScience release paper: ‘Avalon’, a New Pecan Cultivar with High Levels of Resistance to Pecan Scab.

‘Avalon’ was released to give growers a pecan variety that produces commercial size and quality of nuts with excellent scab resistance. I have tested ‘Avalon’ for several years in both sprayed and unsprayed orchards in Tifton and Albany. The graph below (Fig. 1) shows the results of these trials for several cultivars over many years. In this trial we rated the most severe infection seen on any cluster on the tree. In these trials I have only ever seen trace scab on one or two nut clusters on ‘Avalon’, and in most years scab was not observed. I have heard reports of scab infection on ‘Avalon’ in southeast Georgia, so I cannot say ‘Avalon’ will not scab. However, currently ‘Avalon’ is one of the best cultivars I have tested for resistance to scab, and current control regimes should result in very low levels of scab in most locations. While scab resistance of ‘Avalon’ is excellent, ‘Avalon’ is a preferred cultivar for black aphids, and damage will occur in ‘Avalon’ prior to many other cultivars. 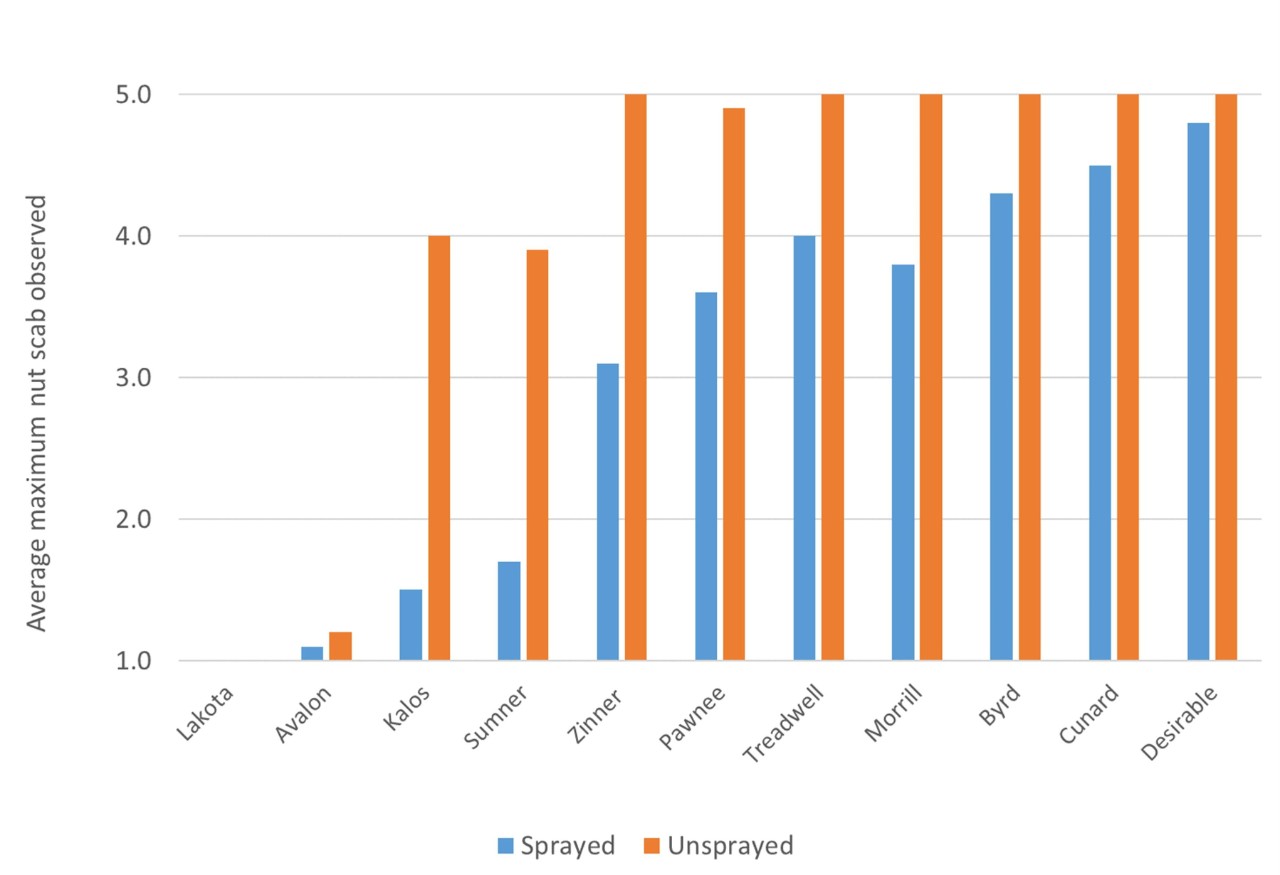 Figure 1. Nut scab infection of te most severely affected cluster on 'Avalon'< 'Kalos' and other cultivars over several years (2013-2020) in sprayed and unsprayed orchards in Tift County, Georgia.

Yield trials at the Ponder Farm in Tift Co. indicate that ‘Avalon’ is a very productive cultivar (Fig. 2).  'Avalon’ was topworked onto 4 to 5-year-old trees in this trial in 2009, and were yielding similarly to the other non-topworked cultivars by 2012.  Yields of ‘Avalon’ were at the upper end of this test, and greater than ‘Byrd’, ‘Desirable’ and ‘Pawnee’.  We did not get a crop on ‘Kalos’, ‘Byrd’, ‘Pawnee’ or ‘Desirable’ in 2021, but not for the same reason.  ‘Kalos’ was overcropped in 2020, with resulting poor quality in 2020 followed by an off year in 2021.  ‘Byrd’, ‘Pawnee’, and ‘Desirable’ were not harvested in 2021 because the crop was lost to scab.  This orchard receives only moderate fungicide applications so that cultivars can be evaluated for scab resistance, and this level of protection was simply not enough to be effective at controlling scab on these cultivars in the very wet 2021.  Because the crop was lost due to my not effectively controlling scab, 2021 yields were not calculated in the average yields shown below the bar graph.  If 2021 yields had been included then ‘Avalon’ would have outpaced the other cultivars by a wider margin.

Yields of ‘Avalon’ in particular have been outstanding in the Tift Co. trial.  Average yields were high, with an increasing yield trend throughout the trial, with no real off years.  It has been my experience after observing many different cultivars in this type of trial over the years that most cultivars will experience an off year following a year when a tree produces more than 80-100 pounds at this age and spacing.  The ability of ‘Avalon’ to average more than 80 pounds per tree for six years in a row is exceptional.

A second yield trial was performed at Shiloh Farms using nursery grafted trees.  Trees were planted at a 25 x 50 foot spacing in 2012, and yields were recorded for years 6-10 (Fig. 3).  ‘Avalon’ yielded the most in this trial, ‘Kalos’ and ‘Zinner’ were very similar to each other in yield, and ‘Desirable’ was the least productive.  As expected for young trees, yield generally increased each year with little alternation.  ‘Avalon’ grew vigorously in this test, and larger tree size seemed to account for some of the increased yields.  By year 10 there was a lot of overgrowth within the row tree to tree.  Nut size, particularly for ‘Avalon’, was smaller than that seen in the Ponder trial (above).  This was primarily due to a smaller nut being produced on younger trees, and ‘Avalon’ nut size increased from 54 and 52 nuts/lb. in 2017 and 2018 to 48 and 49 nuts/lb. in 2019 and 2020.  ‘Kalos’ and ‘Zinner’ produced very similar yields and nut quality in this trial (left).  ‘Desirable’ did not perform well in this trial, and I do not really have a good explanation for why this occurred, but the trees did not appear as healthy as the trees of the other cultivars.  Taken together, these two yield trials indicate that ‘Avalon’ appears to be a cultivar with very good yield potential. 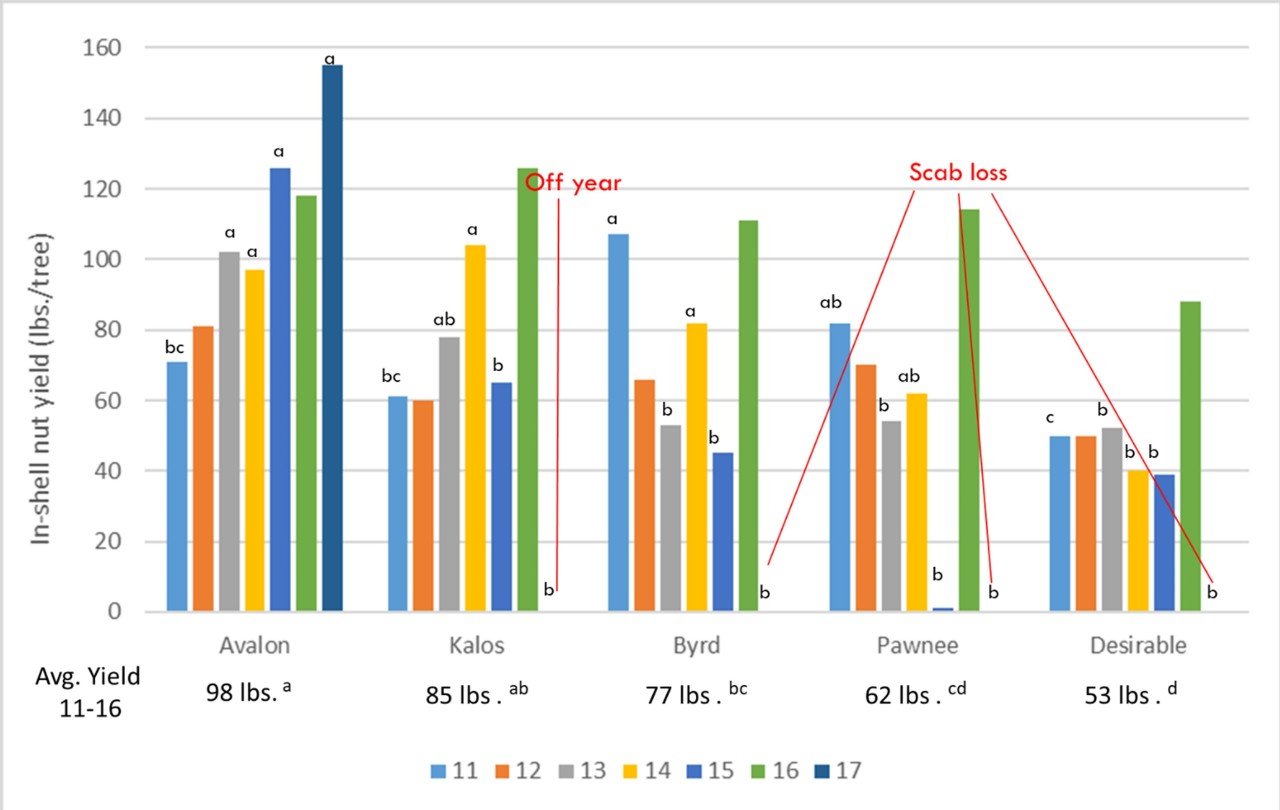 Figure 2. Average annual in-shell nut yield (lbs. per tree) of pecan cultivars in Tift County, Georgia in the eleventh through the seventeenth year of growth (2015-2021). Tree spacing is 40 feet by 40 feet. Mean separation within a year by Duncan's multiple range test, P<0.05. 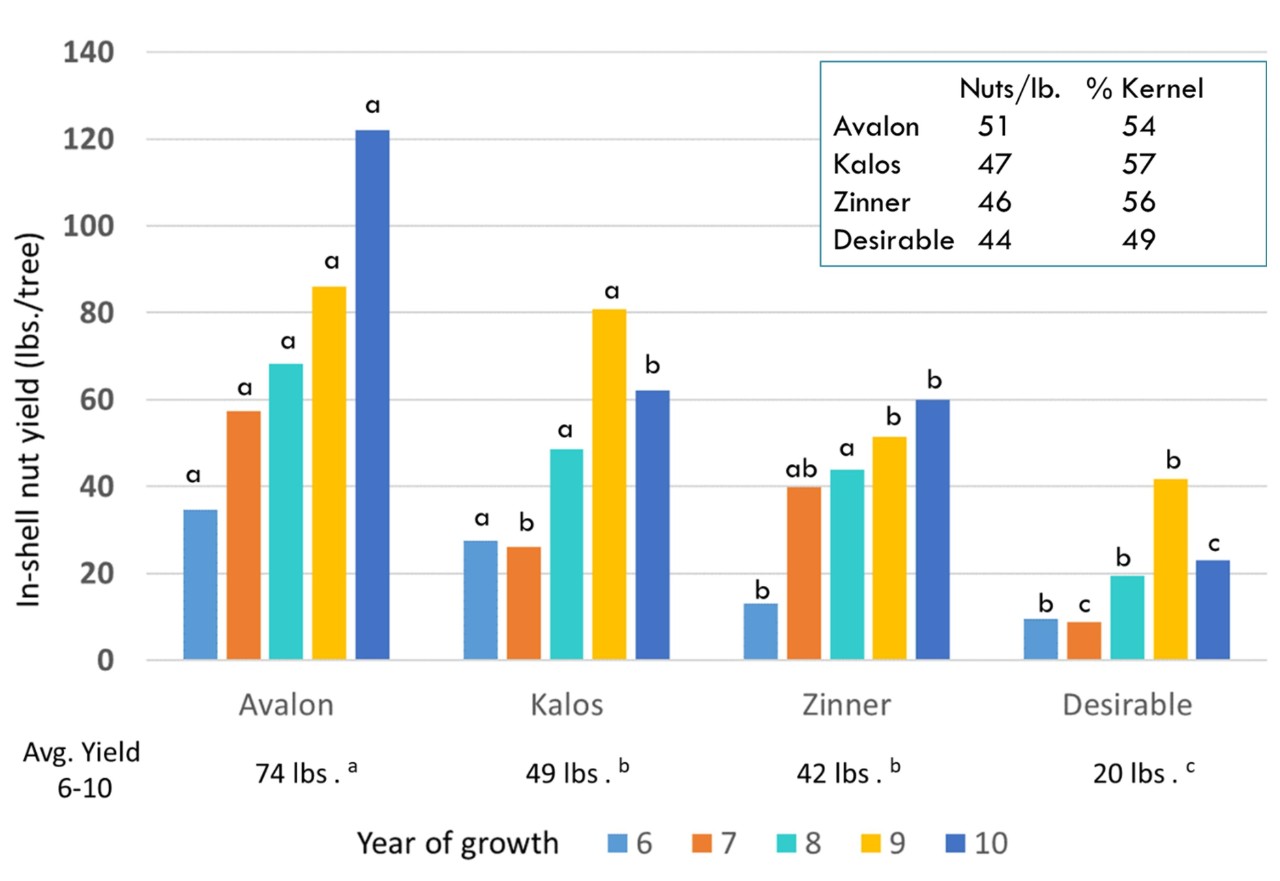 Figure 3. Average annual in-shell nut yield (lbs. per tree) of pecan cultivars in Berrien County, Georgia in the sixth through the tenth year of growth (2017-2021). Tree spacing is 25 feet by 50 feet. Mean separation within a year of growth by Duncan's multiple range test, P<0.05.

Nut size and quality of ‘Avalon’ is good, but not exceptional (Table 1, below).  It average 47 nuts/lb. and 53-54% kernel on mature trees, but was closer to 54 nuts/lb. on young trees first coming into production.  ‘Avalon’ will not size as large as the nut weight indicates because it has an oblong nut shape that allows it to fall through the sizer easier than a rounder nut like ‘Stuart’.  Like its parent ‘Caddo’, ‘Avalon’ kernels tend to shrink down into solid kernels that shell out well. Color is medium, not quite as light as ‘Desirable’.  No veining or spotting has been observed on ‘Avalon’ kernels.  Shuck split of ‘Avalon’ is a few days ahead of ‘Desirable’.  Shell thickness is moderately thin, similar to ‘Desirable’.

Consistency is often an under-appreciated factor of pecan cultivar quality.  One of the ways in which I visualize consistency is to plot the nut size and percent kernel of each tree’s crop over the years in a single graph. The graph below (Fig. 4) plots % kernel on the horizontal axis and nuts/lb. on the vertical axis for many individual tree yields over the years in the Tift Co. trial.  When a cultivar produces consistent quality, the spread of the dots will be relatively compact, as it is for ‘Avalon’.  You can see from the figure that ‘Avalon’ never fell below 50% kernel, but some crops were slightly smaller than 50 nuts/lb.

Phenology and nut and kernel quality attributes of pecan cultivars in Tift Co., GA in the seventh through fifteenth year of growth (2012-2020).

Table 1. Phenology and nut and kernel quality attributes of pecan cultivars in Tift Co., GA in the seventh through fifteenth year of growth (2012-2020). 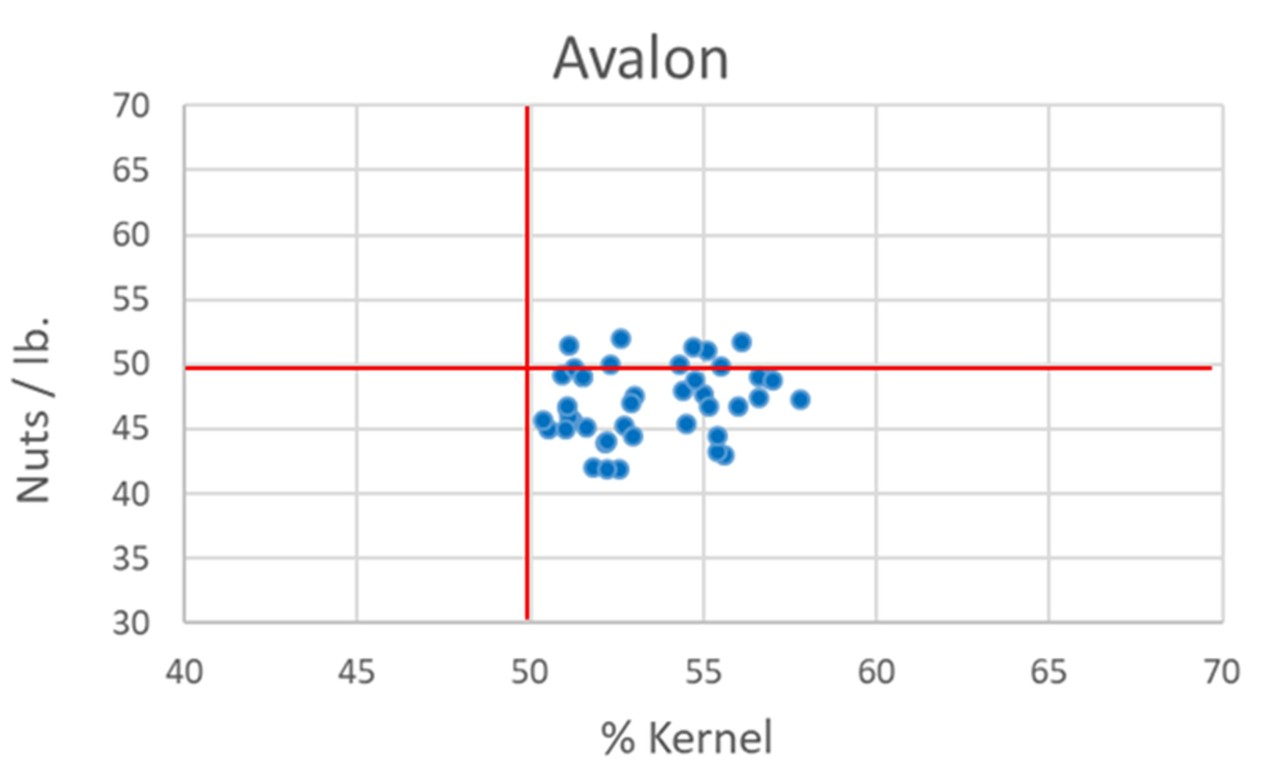 ‘Avalon’ is a type II, protogynous, cultivar.  My favorite pollinizers for ‘Avalon’ are probably ‘Kalos’ and ‘Whiddon’.  Both of these cultivars have moderate scab resistance, a reduced need for crop load thinning, and would be pollinated by ‘Avalon’.  ‘Desirable’ is also a good pollen match for ‘Avalon’, but would, of course, need much more scab control than ‘Avalon’.  ‘Creek’ is a suitable pollinizer for ‘Avalon’ with good levels of scab resistance, but will need crop thinning.  Avoid using ‘Caddo’ as a pollinizer for ‘Avalon’ because it is a parent of ‘Avalon’ and the resulting inbreeding may lead to reduced nut quality.

Overall, I really like ‘Avalon’, especially for growers in the more scab prone southern Georgia regions.  Aside from the excellent scab resistance, this cultivar appears to be a very high-yielding and easy keeping tree.