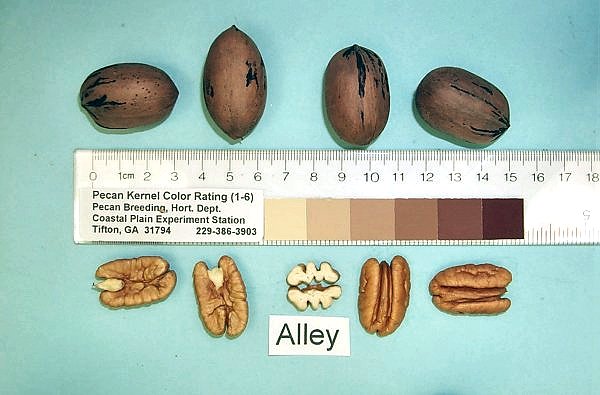 This cultivar was selected by Mrs. C.H. Alley of Scranton, Miss. The nut, from an unknown tree, was given to her in 1871. She planted it in a box in 1871, and in 1872 transplanted the seedling to her garden. It began bearing at about the 9th year and with time, obtained the reputation of being a steady and prolific bearer. In 1896 F.H. Lewis, Scranton, Miss., began propagating 'Alley' for sale. At one time, 'Alley' was popular in southwest Georgia and north Florida. In the southeastern United States, 'Alley' was one of the "big four" in the 1920's, along with 'Pabst', 'Schley' and 'Stuart'. 'Alley' is the male parent of 'Caddo' which is recommended for Georgia. (Sparks, 1992).

This is a venerable older cultivar that was once very popular. 'Alley' is similar to 'Stuart' in size and quality. Scab and black aphid control are often a problem. Scab susceptibility was one of the reasons this cultivar fell out of favor. Generally the tree has too many problems to make it profitable to grow in commercial orchards. One of the best of the older cultivars though.

'Alley' production from the Old Variety Test. Each colored line represents the yearly production in pounds of nuts from an individual tree beginning the year planted.