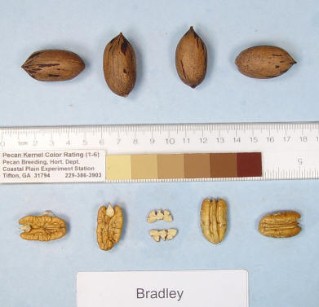 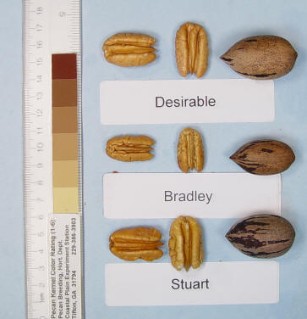 The original tree of this variety was grown from a 'Frotscher' pecan planted about 1886 at Macclenny, Fla., by Mr. D.C. Griffing. It bore first in 1892, and its precocity and productiveness, coupled with its early ripening season, caused its owners to begin the propagation of it about 1896. It was catalogued and introduced in 1898 by the Griffing Brothers Company. The original tree has been heavily cut for scions, so that no very accurate determination of its productiveness has been possible, but it is reported to have borne well and regularly up to 1907, when it yielded nearly 200 pounds of nuts.

A small nut with few redeeming characteristics. Not a recommended cultivar.

'Bradley' production from the Old VarietyTest. Each colored line represents the yearly production in pounds of nuts from an individual tree beginning the year planted.