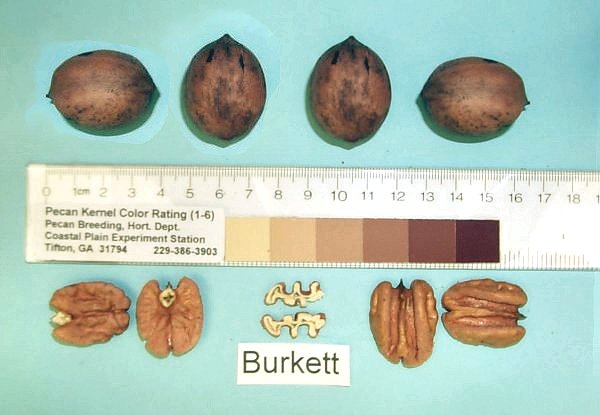 The original tree of this cultivar was discovered in the fall of 1900 by Omar and Joe Burkett, sons of J.H. Burkett, who was a pioneer in pecan culture. The tree was situated on the bank of Battle Fish Creek, Callahan County, TX. In 1903 J.H. Burkett transferred two buds of the original tree to a seedling. The original tree was destroyed by a competition for the propagation rights. Mr. Burkett began to disseminate 'Burkett' scions in 1911. At one time, 'Burkett' was the most popular and profitable cultivar in Texas. 'Burkett' has been used in breeding and two cultivars, 'Apache' and 'Comanche' with 'Burkett' parentage, have been released. (Sparks, 1992).

'Burkett' production from the Old Variety Test. Each colored line represents the yearly production in pounds of nuts from an individual tree beginning the year planted.