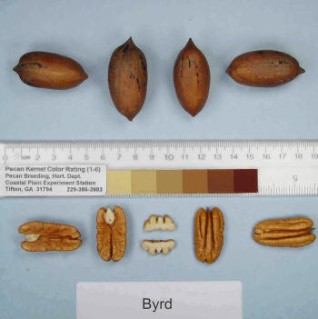 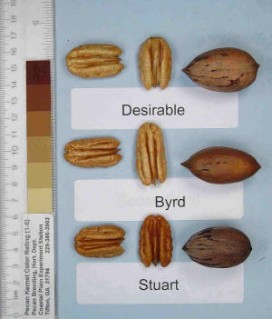 ‘Byrd' was released in 2012 by Dr. Darrell Sparks at the University of Georgia.  ‘Treadwell’ was originally tested as ‘Selection No. 89’ and originated from the cross ‘Wichita’ x ‘Pawnee’.

We planted ‘Byrd’ twice in the Ponder Variety Test.  We planted five trees in 2006, and then five more in 2009.  The data above was all from the older trees planted in 2006.  Yields of ‘Byrd’ have been very good, more than either ‘Pawnee’ or ‘Desirable’ (Table 1).  ‘Byrd’ is a very precocious cultivar, with a large number of nuts per cluster, and should be crop thinned.  As you can see from the yield graph (Figure 1), our yields have been up and down on our trees which have not yet been crop thinned.  Even so, the down years has not been down to zero.  I consider ‘Byrd’ a very productive tree that wants to set a crop unless you totally overload it the year before.  I have, however, seen top-worked trees set so many nuts that the limbs broke off and the nuts were hollow, so if you plant this cultivar I would consider crop thinning to be a necessity long term.

Nut quality of our ‘Byrd’ trees has been variable.  We averaged 49 nuts/lb., but this varied from as large as 41 nuts/lb. to as small as 60 nuts/lb.  Nut size is heavily influenced by water availability in the nut sizing period and growers of ‘Byrd’ should make sure the trees get adequate water in this period.  ‘Byrd’ shells are very thin and percent kernel ranged from 56-60%.  ‘Byrd’ had some issues with kernel color like its parent ‘Pawnee’.  Color some years was dark, and veining was also apparent some years.  These issues may be worsened when trees are overcropped.  Kernel color does not hold well, and ‘Byrd’ should not be held for long periods at room temperature.

‘Byrd’ is susceptible to pecan scab and will need a full season of fungicide protection and should not be grown in very scab prone areas (Table 2).  Our results show ‘Byrd’ to be similar to other scab susceptible cultivars such as ‘Pawnee’, ‘Treadwell’, and ‘Morrill’.

‘Byrd’ is type I, protandrous’, with very early bud break in the spring.  ‘Byrd’ is usually one of the first cultivars to start to release pollen.  ‘Byrd’ will match with ‘Elliott’, ‘Avalon’, ‘Lakota’, ‘Giftpack’, ‘Kiowa’, ‘Morrill’, ‘Stuart’, and ‘Zinner’ at Tifton.

‘Byrd’ was selected as a highly productive early maturing cultivar with good nut quality.  In comparison to ‘Pawnee’, ‘Byrd’ seems much more productive, especially in young trees. Because of this, ‘Bryd’ will likely need more crop thinning than does ‘Pawnee’.   Harvest of ‘Byrd’ does not begin quite as early as ‘Pawnee’, but ‘Byrd’ opens fairly quickly once it starts, unlike ‘Pawnee’ which often opens its shucks over a period of several weeks.  ‘Byrd’ will be one of the first things you harvest, and ‘Byrd’ should be harvested and sold quickly so that its color does not deteriorate.  Crop thinning may help to reduce kernel color and quality issues.  In addition to crop load management, scab control will be a key to being successful with this cultivar.  While not quite as bad as ‘Desirable’, this cultivar will need careful management for scab.  ‘Byrd’ trees are upright in tree form and may be planted closer together than other cultivars. 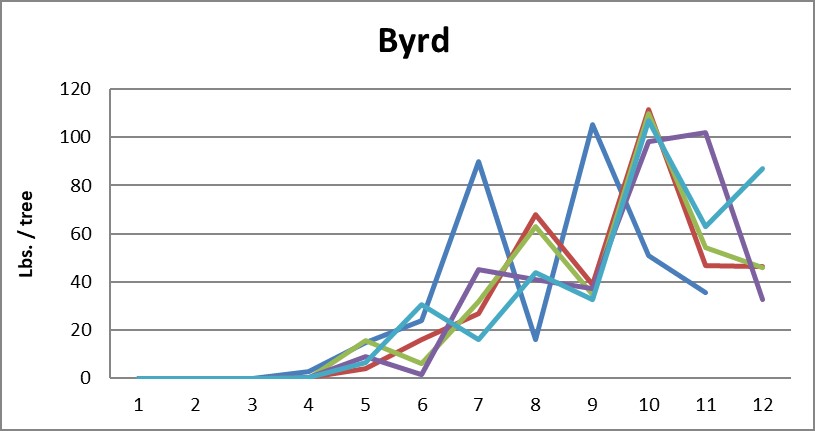 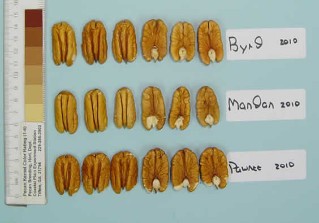 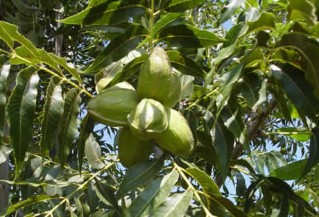 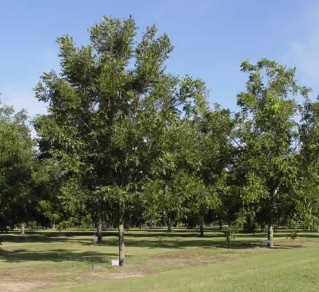