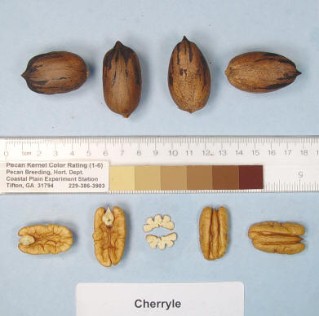 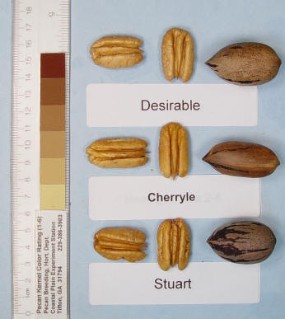 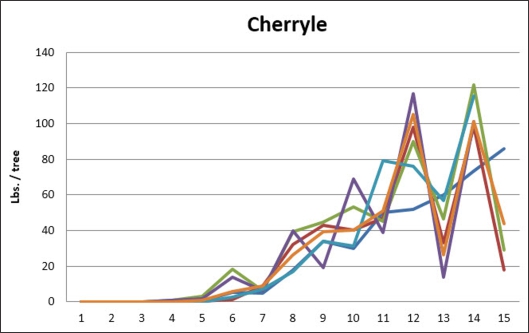 Selection from Grand Bay, Ala. with a large-sized nut of high quality.

'Cherryle' was planted in our orchards in 2002 and bore its first small crop in 2005. We have followed ‘Cherryle’ for 15 years and are no longer collecting yield data on this cultivar.  Our ‘Cherryle’ trees took a while to start bearing, and didn’t have more than 10 lbs. of nuts until year 8.  After that, ‘Cherryle’ was a fairly productive tree (Table 1), but yields showed fairly strong alternation (Fig. 1).  In year 12 (2013) trees averaged 90 lbs., but then had half that yield in 2014.  In 2015 they were up again, averaging 102 lbs., but in 2016 were down to 44 lbs.  ‘Cherryle’ is a very spreading tree, and in the heavy crop years limbs hang way down and limb breakage is common (see picture below).  For these reasons if you are going to grow ‘Cherryle’, you should plan on crop thinning this cultivar in the “ON” years.  I would note, however, that while the return crop suffered from the heavy yielding years, nut size and quality remained good even with the large crop size.

Nut size and quality of ‘Cherryle’ are very good.  Nuts were heavy, 41 nuts / lb., and well filled, 56% kernel (Table 2).  Nuts shell out well into clean halves, and the kernel has nice oil content and no fuzzing.  Color of ‘Cherryle’ was occasionally a little dark, somewhat like ‘Forkert’.  Despite being very heavy, ‘Cherryle’ will not size out particularly large.  The nut is very oblong rather than round and it fits through the sizer easily.  Thus we got 12% size 14, 63% size 15, and only 24% size 16.  This grades out smaller than ‘Stuart’ and ‘Desirable’, which weighed less, but are more round in shape.  ‘Cherryle’ shells are rather thin, which can be an issue.  When well-filled, and harvested in the sun, the suture can split open (see picture below).  This can lead to entrance of sand, and if not harvested promptly, ants.  I don’t perceive this to be a huge issue, but some growers may not like it.

Scab resistance of ‘Cherryle’ has been very good (Table 2).  In our sprayed orchard we rarely saw scab at all.  We don’t have it in an unsprayed trial so I can’t comment on how it would do in that situation.  I would imagine that it will be fairly easy to control scab on ‘Cherryle’, but you do need to control (spray) it.  So far it has looked better than ‘Zinner’ and ‘Stuart’, and much better than ‘Desirable’.  Black aphids have also not been an issue on this cultivar.

'Cherryle' is a late type II (protogynous) cultivar that would be pollinated by 'Amling', or 'Cape Fear', or a combination of an early shedder like 'Desirable' or 'Byrd' and a later shedder like 'Elliott', or 'Schley'.  ‘Cherryle’ trees grow in a spreading fashion (see picture below) and should not be planted very close together.

‘Cherryle’ and ‘Zinner’ are two newer cultivars that we tested at the same time.  In general, I have liked ‘Zinner’ better because it is somewhat more productive, and much more consistent yielding year to year without crop thinning.  I also like that ‘Zinner’ is a more upright tree with very little limb breakage.  ‘Cherryle’ also has that suture split issue.  Some growers are bothered by this, others seem not to care.  We could, perhaps, reduce this problem by not harvesting on hot sunny days.  ‘Cherryle’ does have some advantages over ‘Zinner’.  Chief among these are larger size than ‘Zinner’.  Despite not grading out as large as ‘Stuart’, ‘Cherryle’ is a large nut and that is obvious when you see it.  ‘Cherryle’ also seems to have more scab resistance and less black aphid issues than ‘Zinner’.  I think ‘Cherryle’ could have a place in Georgia orchards, especially if a grower were to crop thin to moderate alternation and reduce limb breakage. 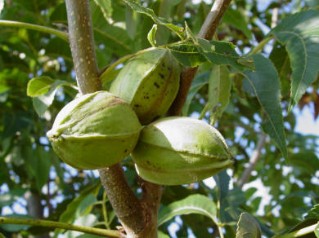 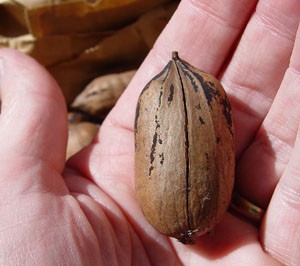 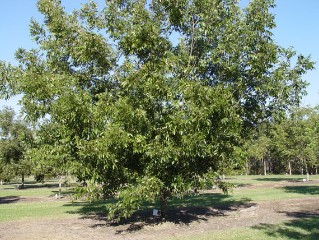 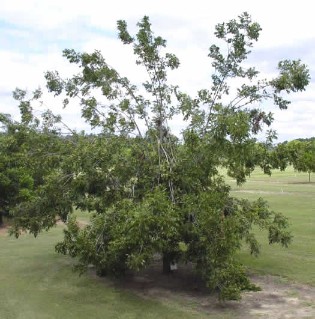