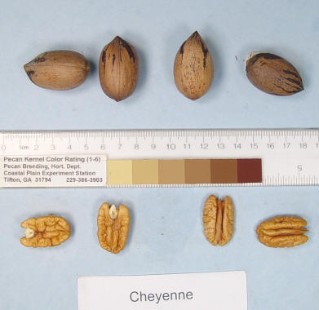 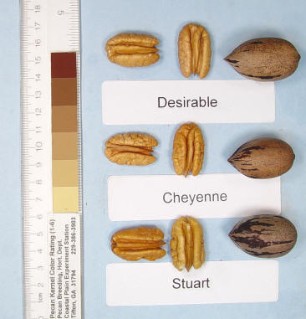 'Cheyenne' has been a low-yielding cultivar in our test. This is partly due to the fact that 'Cheyenne' trees tend to be smaller than other cultivars, and also to the high alternate bearing intensity of the cultivar. Kernel quality in young trees is acceptable, but it declines as the trees mature. 'Cheyenne' is extremely susceptible to yellow pecan and blackmargined aphids, leading to sooty mold accumulation. 'Cheyenne' also is very susceptible to pecan scab. At one time, it was thought that 'Cheyenne' could be used in high-density orchards because of its small tree size. However, 'Cheyenne' has too many negatives to make it a profitable cultivar in the Southeast.

'Cheyenne' production from the Ponder Variety Grove test. Each colored line represents the yearly production in pounds of nuts from an individual tree beginning the year planted. *Note the up and down of the alternate bearing cycle.