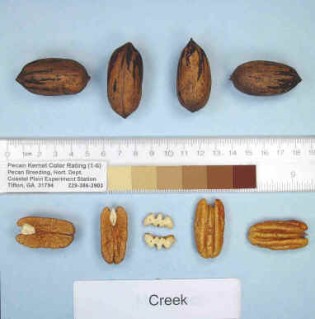 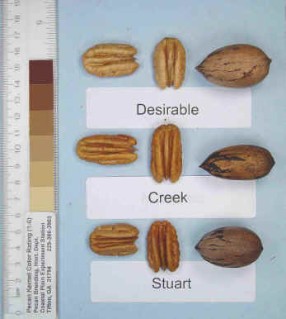 Originally tested as USDA 61-6-67 from a 'Mohawk' x 'Starking Hardy Giant' cross, 'Creek' was released in 1996 by the USDA-ARS in cooperation with the Agricultural Experiment Stations of Alabama, Georgia, Louisiana and Texas. (Thompson, et al, 1996).

'Creek' was released primarily for its superior precocity and disease resistance. It also seems to bear well under competition from other trees. In our test, 'Creek' began bearing quickly, but actual kernel yield was only average. Productivity as a mature tree was similar to the other cultivars, with a tendency to alternate bear. Nut size was good at 55.2 nuts/pound, but quality was often poor with percent kernel averaging only 48.3%. 'Creek' only produced a small percentage of kernels rated fancy due to a tendency to be poorly filled. 'Creek' kernels also often have an unattractive wrinkling of the seed coat at the apex of the kernel. 'Creek' was released as a highly productive temporary tree that could be removed as the orchard matured. 'Creek' may be suitable under some high-density situations where the crop load is thinned, but we do not recommend it for standard orchard conditions. 'Creek' is reported to set good crops on shaded limbs, a desirable trait for high-density plantings. Pest resistance of 'Creek' is good, it tends to be an "easy keeper" for most disease and insect problems. Harvest date of 'Creek' is usually earlier than what we saw in our orchards, probably early October, this allows it to be sold for a better price than would normally be obtained for a nut of mediocre quality. 'Creek' trees have an upright and strong tree form.

'Creek' production from the Ponder Variety Grove test. Each colored line represents the yearly production in pounds of nuts from an individual tree beginning the year planted.