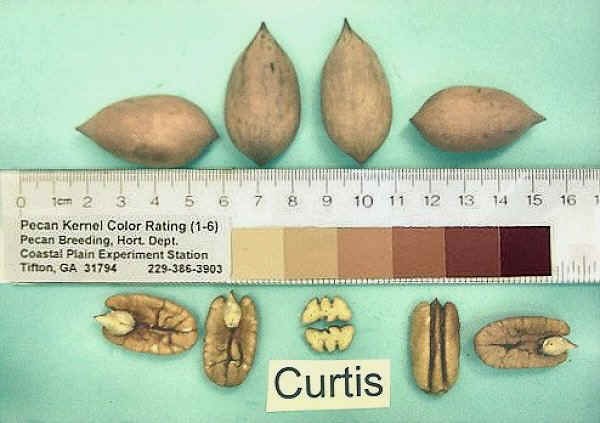 The original tree of this cultivar was grown from a nut of the 'Turkey Egg' cultivar. The nuts were planted as a seedling orchard in 1886 by Dr. J.B. Curtis, Orange Heights, Fla. In 1896, Dr. Curtis propagated this cultivar and began initial dissemination. In 1988 the tree was still producing nuts. 'Curtis' was popular in southeastern Georgia and south to middle Florida. 'Curtis' has been used in pecan breeding and one cultivar, 'Houma', has been released with 'Curtis' parentage (Sparks, 1992).

'Curtis' has a small, late-maturing nut with high percentage kernel. A flecking on the kernel testa might be objectional to some markets. It has had a good resistance to scab for a long time and seems to be an easy keeper tree. Its small size (89 nuts/lb), low yield, and late maturity are its biggest minuses. This cultivar isn't productive enough for commercial groves. It would, however, be a fairly good choice for a yard tree. The yield is usually low enough that the quality is good, and the kernels are nice and oily. Along with 'Elliot', 'Curtis' nuts are often used for rootstock seed in the Southeast.

'Curtis' production from the Old Variety Test. Each colored line represents the yearly production in pounds of nuts from an individual tree beginning the year planted.