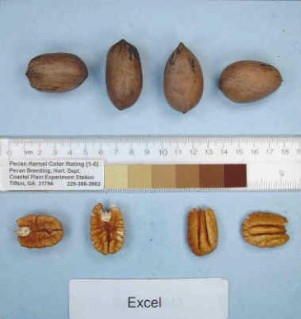 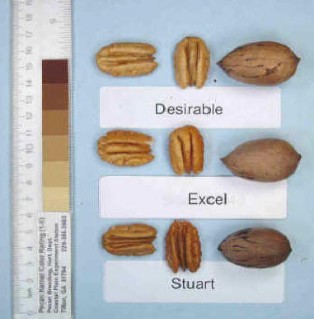 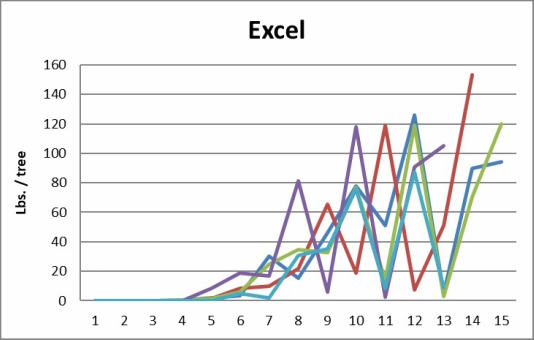 Discovered as a seedling tree on a pecan farm near Blackshear, Ga., and patented by Clough Pecan Nursery.

‘Excel’ was discovered as a seedling tree on a pecan farm near Blackshear, Ga. It is patented and disseminated by Mr. Andy Clough who operates a nursery on his farm. We began testing this selection in 2002, and discontinued yield testing in 2016 after 15 years.  ‘Excel’ was a productive cultivar in this test (Table 1), but yields began serious alternation fairly quickly (Fig. 1).  Excel has a large cluster size (3.2) and sets more crop than it can mature without compromising the next year’s crop.  Growers who plant ‘Excel’ should plan on removing excess crop in the “ON” year or they will have serious alternate bearing problems.

‘Excel’ produces very large nuts with a thick shell.  Nuts size was 45 nuts / lb., but percent kernel was only 50%.  Kernels were usually well developed and attractive, but the thick shell will limit percent kernel to the low 50’s at best.  The kernel has a very light color which holds well in storage, and the shape matches ‘Desirable’ very well.  The physical size of ‘Excel’ is large.  We produced 52% size 16 and 40% size 15 in Excel, which graded out as larger than ‘Desirable’.  However, we have had trouble shelling ‘Excel’ into complete halves.  The shell is thick and there is often little space between the shell in the kernel, leading to chipping and breakage of the kernel.

We have never observed scab on this cultivar in our sprayed (Table 2) or our unsprayed orchards, and it has excellent resistance. However, it has been reported to scab at its home orchard in southeast Georgia and in Florida.  ‘Excel’ has shown very little susceptibility to black aphid damage in our orchards.  This may be in part to an open canopy that reduces the shading that black aphids prefer in the lower interior limbs.

‘Excel’ trees have several traits that make them somewhat unique.  Trees are very slow to break buds in the spring, and are among the last to flower. In addition, the buds are asynchronous in breaking many years, resulting in variable bloom time and it often seems the tree could pollinate itself.  The trees have a very thin canopy with few leaves and widely spaced leaflets.  It often appears that trees don’t have enough leaves for the crop, but it seems to do OK, and the thinner canopy may facilitate spray penetration and canopy drying to reduce scab susceptibility.  Branches of ‘Excel’ are thin, causing bending and giving the tree a “weepy” look (see picture below).

'Excel' is a type II (protogynous) cultivar, which has very late bud break and flowering. 'Excel' would be pollinated by 'Elliott', 'Gafford', 'Kanza', 'Mandan', 'MoneyMaker', and 'Schley'.  ‘Excel’ will serve as a late season pollinizer for ‘Desirable’, ‘Caddo’, ‘Gafford’, and ‘Mandan’.

We recommend this cultivar for low input and organic plantings because it is one of the few cultivars with large nut size and high resistance to scab. It also appears to have good resistance to both black and yellow aphids. We only recommend it for trial in commercial plantings because of its low percent kernel and low yields. I also believe that it may be difficult to consistently shell 'Excel' nuts into clean halves.  A lot of ‘Excel’ has been planted in Georgia, especially near its home location in southeast Georgia where scab is difficult to control. 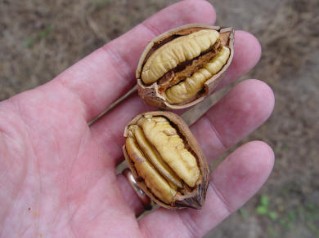 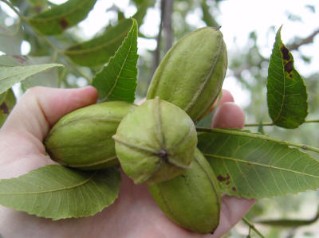 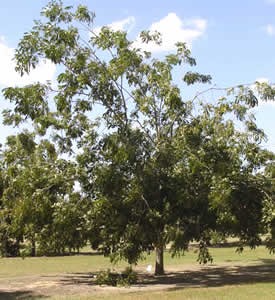