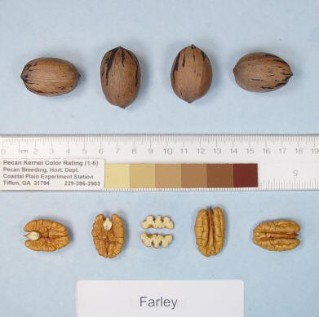 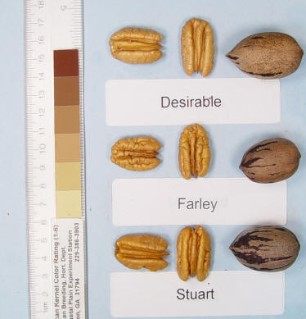 This cultivar was discovered in about 1918 in Jackson County, Fla. by B.W. Soone, Stone Nursery Co., Thomasville, GA. The parentage is unknown. The cultivar was introduced about 1925. Reports of high yields evidently prompted 'Farley's' recommendation by the Cooperative Extension Service for commercial orchards in Georgia for several years (Sparks, 1992).

This small, cubical, thin-shelled nut has excellent quality nuts (51% kernel) and consistently good yields. The thin shell makes it susceptible to bird damage. The older trees of this cultivar were at the lower edge of the orchard and lost some nuts to predators; thus, yields would have been even greater than those shown. It still ranked in first place in average annual yield at age 45 through 60. The nut is easily shelled into perfect halves either mechanically or by hand. The tree lacks precocity and also matures fairly late in the season. Resistance to scab and other diseases make it a good choice for home orchard plantings, but unfortunately it is usually no longer found in the nursery trade. It is reputed to have a hickory type flavor that is pleasing to some.

'Farley' production from the Old Variety Test. Each colored line represents the yearly production in pounds of nuts from an individual tree beginning the year planted.