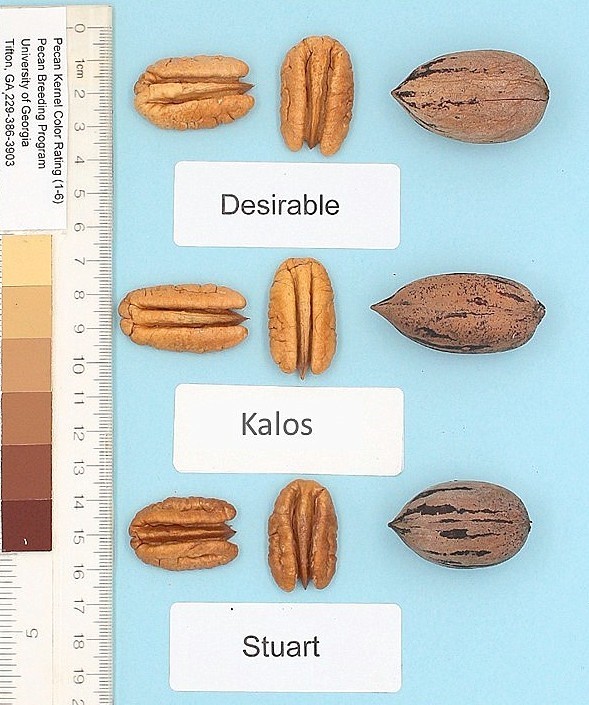 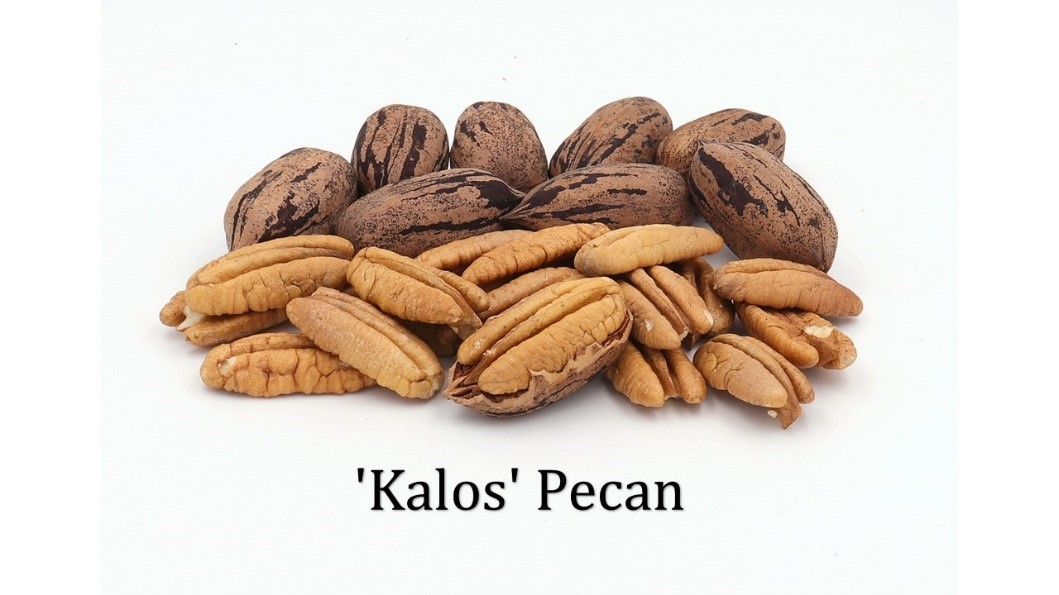 ‘Kalos’ was the second release of the Tifton-based UGA pecan breeding program, and was selected as Ga. 3-6-32 from a cross of ‘Sioux’ x ‘Desirable’.  ‘Kalos’ was notable for its large nut size, high percent kernel, bright kernel color and vigorous growth. UGA has patented ‘Kalos’ and it is being sold by licensed nurseries in the southeastern U.S.  A list of nurseries with ‘Kalos’ is available by emailing Patrick Conner at pconner@uga.edu.  More information can be found in the HortScience release paper: ‘Kalos’, a new pecan cultivar for commercial orchards in the Southeastern United States.

‘Kalos’ does not have the strong resistance to scab that our first release, ‘Avalon’, has shown, and ‘Kalos’ will need fungicide sprays to be successfully grown in the southeastern U.S.  However, with the use of fungicides scab infection has been low.  ‘Kalos’ has been tested in both sprayed and unsprayed orchards over several years and has shown moderate resistance to pecan scab (Fig. 1).   ‘Kalos’ rated very similarly to ‘Sumner’ in these trials.  Scab was observed at non-damaging levels in sprayed trials in wet years, and was not observed in those trials in dry years.  In unsprayed trials scab was almost always observed on ‘Kalos’, and in wet years was damaging enough to reduce quality.  Growers will need to apply fungicides to control scab on ‘Kalos’, but scab is more easily controlled on ‘Kalos’ than on cultivars such as ‘Pawnee’, ‘Zinner’, and ‘Desirable’.  ‘Kalos’ is not a preferred cultivar for the black pecan aphid and was usually one of the least affected cultivars in our trials (Table 1, below). 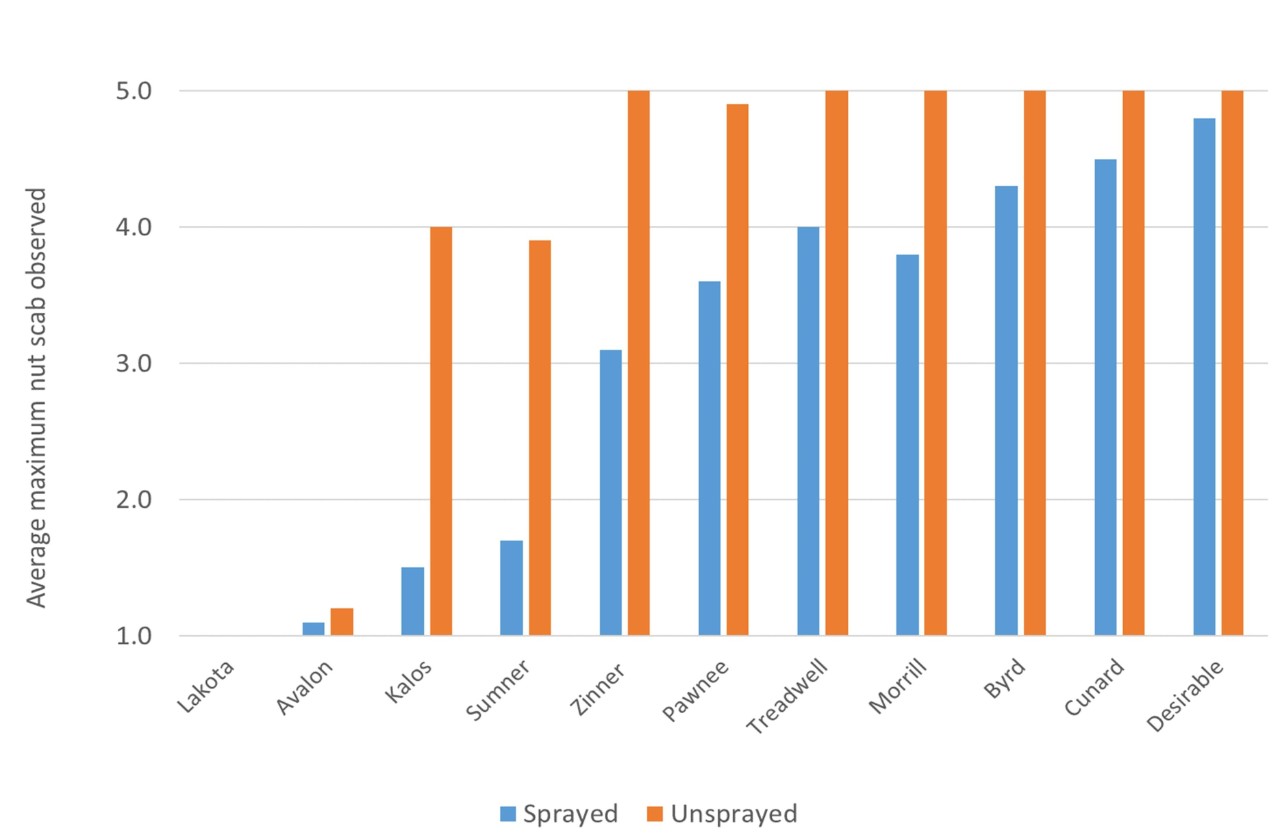 Yield trials at the Ponder Farm in Tift Co. indicate that ‘Kalos’ is a productive cultivar (Fig. 2).  ‘Kalos’ was topworked onto 4 to 5-year-old trees in this trial in 2009, and were yielding similarly to the other non-topworked cultivars by 2012.  Yields of ‘Kalos’ were at the upper end of this test, and greater than ‘Desirable’ and ‘Pawnee’.  Yields of ‘Kalos’ were statistically similar to ‘Avalon’ in years 2015-2020 (Fig. 2).  Note that we did not get a crop on ‘Kalos’, ‘Byrd’, ‘Pawnee’ or ‘Desirable’ in 2021, but not for the same reason.  ‘Kalos’ was overcropped in 2020, with resulting poor quality in 2020, followed by an off year in 2021.   It has been my experience after observing many different cultivars in this type of trial over the years that most cultivars will experience an off year following a year when a tree produces more than 80-100 pounds at this age and spacing, and ‘Kalos’ was no exception.  ‘Byrd’, ‘Pawnee’, and ‘Desirable’ were not harvested in 2021 because the crop was lost to scab.  This orchard receives only moderate fungicide applications so that cultivars can be evaluated for scab resistance, and this level of protection was simply not enough to be effective at controlling scab on these cultivars in the very wet 2021.  Because the crop was lost due to my not effectively controlling scab, 2021 yields were not calculated in the average yields shown below the bar graph.

A second yield trial was performed at Shiloh Farms using nursery grafted trees.  Trees were planted at a 25 x 50 foot spacing in 2012, and yields were recorded for years 6-10 (Fig. 3).  ‘Avalon’ yielded the most in this trial, ‘Kalos’ and ‘Zinner’ were very similar to each other in yield, and ‘Desirable’ was the least productive.   ‘Zinner’ has been a good yielding cultivar in our trials and the fact that ‘Kalos’ had similar yields I consider to be a good sign of its productivity.  ‘Desirable’ did not perform well in this trial, and I do not really have a good explanation for why this occurred, but the trees did not appear as healthy as the trees of the other cultivars. 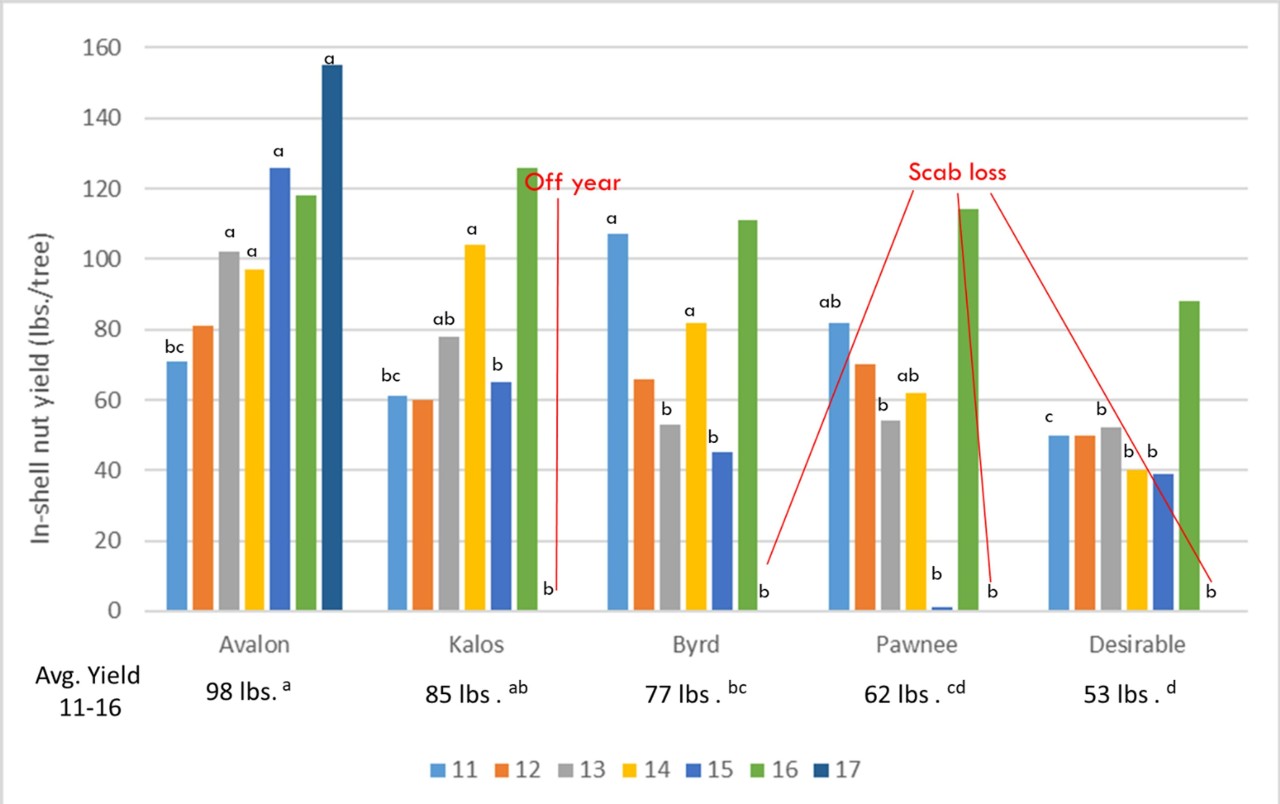 Figure 2. Average annual in-shell nut yield (lbs. per tree) of pecan cultivars in Tift Co., GA in the eleventh through the seventeenth year of growth (2015-2021). Tree spacing is 40 feet by 40 feet. Mean separation within a year by Duncan’s multiple range test, P<0.05. 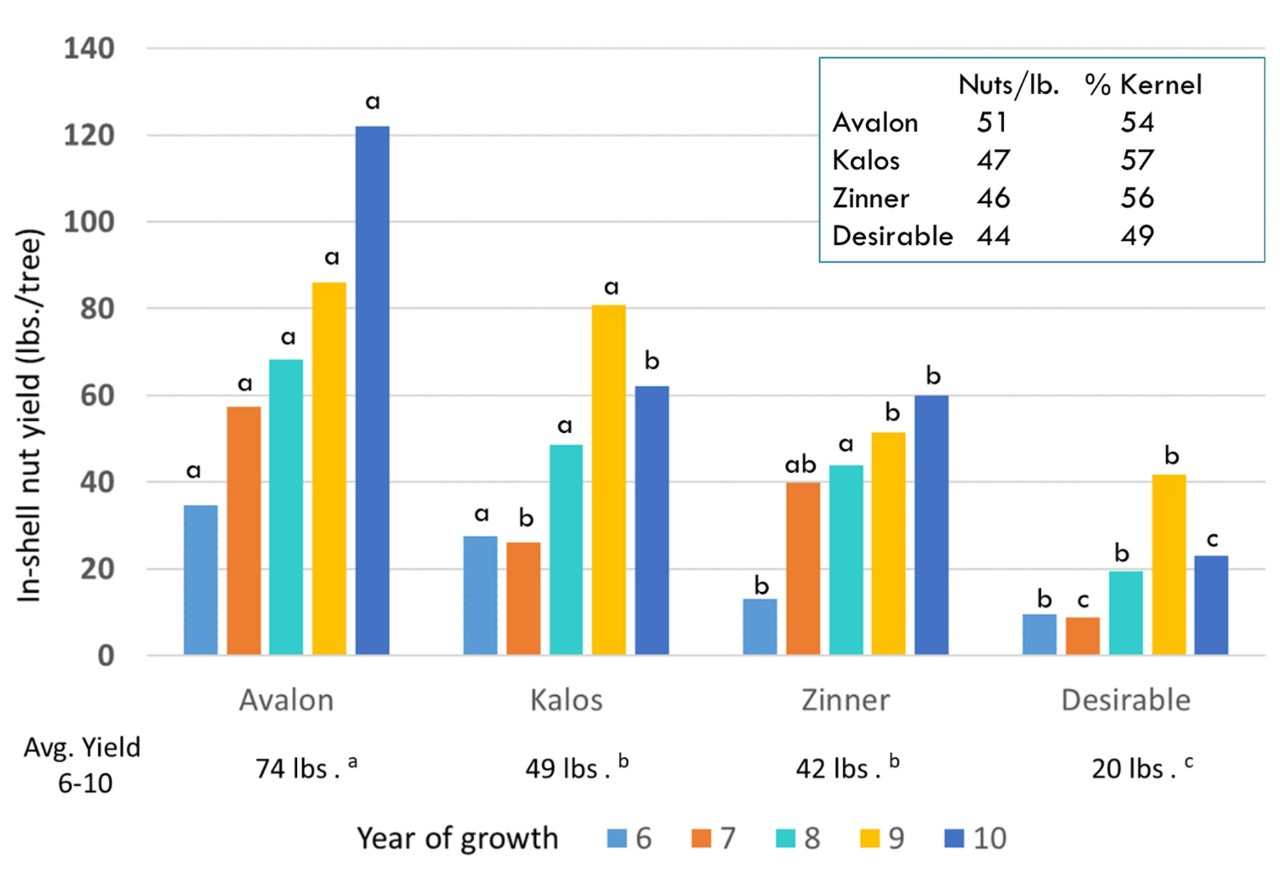 Nut size and quality of ‘Kalos’ is excellent (Table 1, below).  It averaged 45 nuts/lb. and 55% kernel on mature trees, and 47 nuts/lb. and 57% kernel on young trees first coming into production.  The kernels shell out easily into complete halves.  Color is golden, similar to ‘Desirable’, and no veining or spotting has been observed on ‘Kalos’ kernels.  Shuck split of ‘Kalos’ is a few days ahead of ‘Desirable’.  Shell thickness is moderately thin, similar to ‘Desirable’.

Consistency is often an under-appreciated factor of pecan cultivar quality.  One of the ways in which I visualize consistency is to plot the nut size and percent kernel of each tree’s crop over the years in a single graph. The graph below (Fig. 4) plots % kernel on the horizontal axis and nuts/lb. on the vertical axis for many individual tree yields over the years in the Tift Co. trial.  When a cultivar produces consistent quality, the spread of the dots will be relatively compact.  You can see from the figure that ‘Kalos’ was very consistent except for the 2020 tree yields in which it was overcropped, again highlighting the need to control crop load in years of excessive yield.  Otherwise ‘Kalos’ never was lighter than 50 nuts/lb. or less than 50% kernel.

Table 1. Phenology and nut and kernel quality attributes of pecan cultivars in Tift Co., GA in the seventh through fifteenth year of growth (2012-2020).

zBud burst is defined as the stage of growth when individual leaflets separate from the expanding bud. 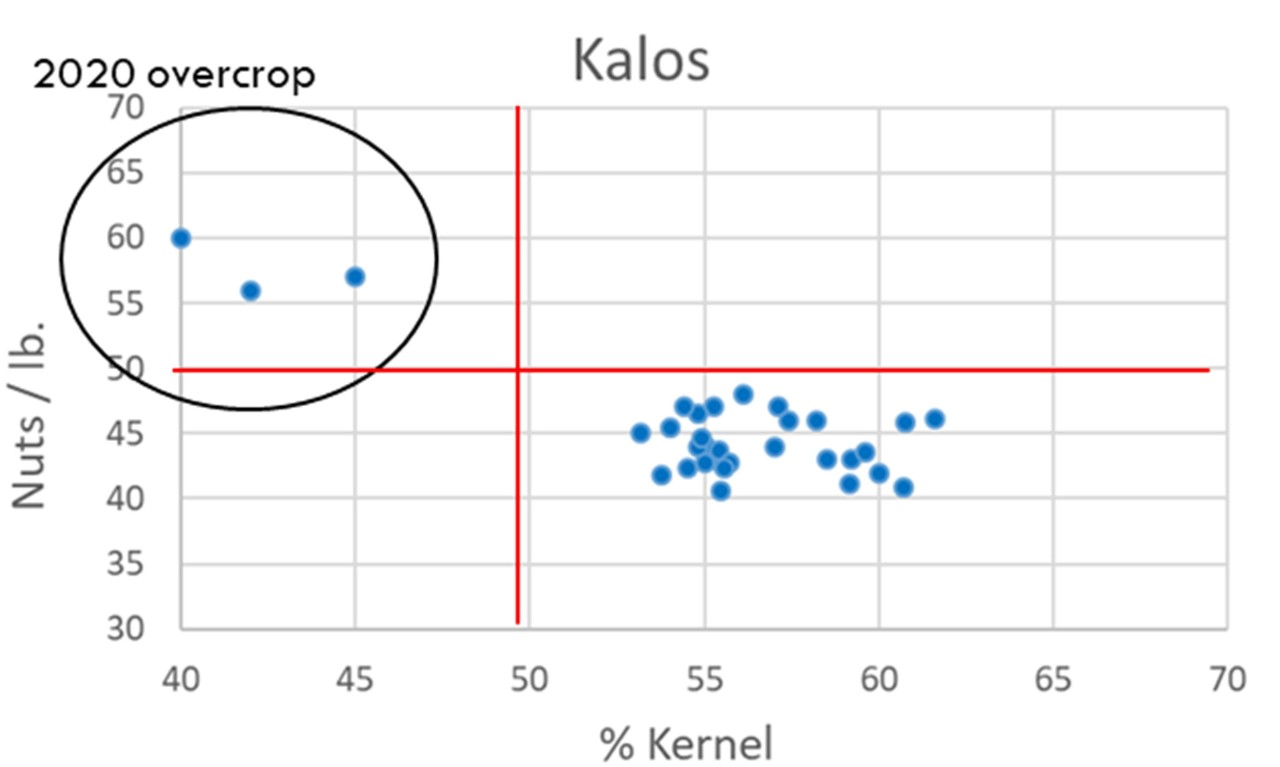 ‘Kalos’ is a type I, protandrous, cultivar.  ‘Kalos’ would best be pollinated by ‘Avalon’, ‘Excel’, ‘Kiowa’, ‘Lakota’, ‘Morrill’, ‘Sumner’ or ‘Zinner’.  I think ‘Avalon’ and ‘Zinner’ would be the best fits as pollinizer for ‘Kalos’ in terms of matching the scab resistance and fruit thinning needs of ‘Kalos’.

‘Kalos’ is a newer cultivar and we are still learning about how best to grow it.  Right now, I see ‘Kalos’ as filling a similar market to ‘Oconee’.  I am wary of planting ‘Oconee’ currently because of a kernel rot issue of unknown cause.  I haven’t tested these two cultivars head to head, but I think ‘Kalos’ will be a higher percentage kernel than ‘Oconee’ and have similar size and scab resistance levels.  ‘Kalos’ also appears to alternate in yield less than ‘Oconee’.  Since ‘Kalos’ is so new, we recommend growers only plant trial acreage to ‘Kalos’ until we see how it performs around the region.