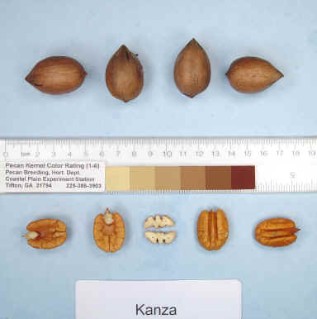 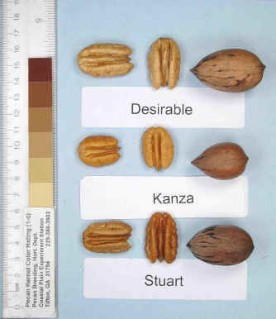 'Kanza' was developed from a cross of 'Major' x 'Shoshoni'. It was released in 1996 by the USDA in cooperation with the Agricultural Experiment Stations of Alabama, Georgia, Louisiana and Texas (Thompson, et al, 1996). Read more about 'Kanza'.

'Kanza' was released because of its superior productivity, quality, disease resistance and cold tolerance. 'Kanza' is not a precocious cultivar, but has good productivity as a mature tree. Alternate bearing has been a problem with 'Kanza', but nut quality in high production years is good. We have noticed a tendency for leaves on 'Kanza' trees to turn yellow and drop early in the fall, perhaps due to its northern adaptation. Harvest date is early, in the last week of September. 'Kanza' produces a small but very attractive round kernel similar to 'Elliott'. 'Kanza' is so similar in appearance to 'Elliott' that it could probably be marketed as 'Elliott'. 'Kanza' was primarily released for use in the northern pecan growing regions due to its excellent cold hardiness. Its early maturity and small size makes it susceptible to predator damage when only a few trees are planted. So far, 'Kanza' appears to have excellent resistance to scab, but it has not been widely grown in southern orchards so it is unknown how this resistance will hold up in the long run. We recommend 'Kanza' as a replacement for 'Elliott' in northern areas where 'Elliott' would be damaged by late spring freezes. In southern areas we continue to recommend 'Elliott' because of its proven track record of high scab resistance.

*Note that 'Kanza' data on this chart is listed under the number 55-11-11 (its USDA selection number) on the bottom of the chart.

'Kanza' production from the Ponder Variety Grove test. Each colored line represents the yearly production in pounds of nuts from an individual tree beginning the year planted. *Note the up and down of the alternate bearing cycle.