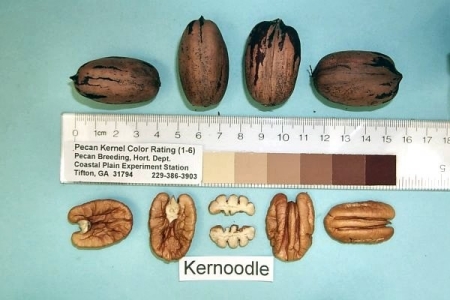 An extra-large nut (45 nuts/lb) with high percent kernel (53). Kernels are smooth and attractive but a little dark. Nuts frequently split at the suture at harvest, but kernels are usually still good. This cultivar seems to often be mixed in by mistake in nursery trees. I have seen several orchards that have a few 'Kernoodle' trees mixed in them. One of the best of the "Super Big" pecans. Not suitable for commercial production, but a fun yard tree with the large size and thin shell.

'Kernodle' production from the Young Variety Test. Each colored line represents the yearly production in pounds of nuts from an individual tree beginning the year planted.