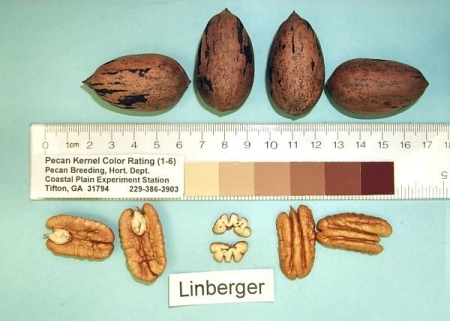 'Linberger' is a selection that was propagated by D.A. Law from Chula, Ga. This tree was from the same orchard as 'Sumner', and given the similarities between the two varieties, they may have a similar parentage. 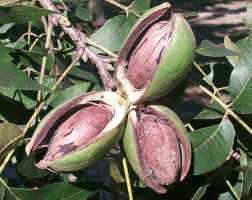 'Linberger' produced well as both a young and mature tree, but began to alternate as a mature tree, leading to a reduction in percent kernel for older trees. Kernel size and coloration are good and very similar to 'Sumner'. Linberger' is one of the latest cultivars in the Ponder Variety Test, and is usually harvested about the same time as 'Sumner'. I believe the Linberger' nut is so similar to 'Sumner' that they would be indistinguishable in the marketplace. 'Linberger' looked good as an immature tree, but a lower percent kernel as a mature tree and a late harvest date will limit the usefulness of this selection. Currently (2004) we are working on propagating this cultivar to distribute for grower tests. 'Linberger' is more precocious than 'Sumner' and may have better black aphid tolerance, its scab resistance is relatively unknown, but appears to be similar to 'Sumner'. We hope to get it in some side by side tests with 'Sumner' to explore the merits of this cultivar better. Currently this cultivar is recommended for trial. I do not know of any commercial sources for this cultivar.