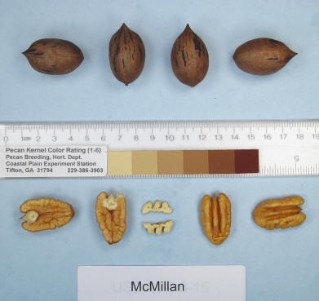 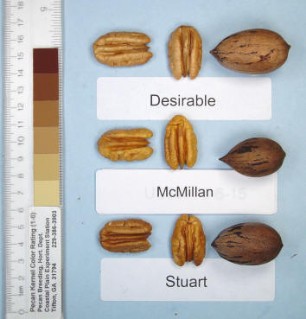 ‘McMillan’ is a cultivar that was brought to our attention by Dr. Bill Goff of Auburn. This cultivar came with a reputation of high sustained levels of production and excellent pest resistance. 'McMillan' was planted in our orchards in 2002 and bore its first crop in 2005. ‘McMillan’ has been a high yielding and precocious cultivar, and early yields were approximately double those of 'Desirable'. Year 8 (2009) was the first heavy yielding year, with many limbs bending down from the crop. In the following year yield was lighter, only about half of 2009, but not bad considering the crop size of 2009. Year 10 was another very heavy crop year, nearly double that of ‘Desirable’, and the following year production was again light. 'McMillan' has now entered into an alternate bearing mode, but light years still have a decent crop. Limb breakage has occurred, but has been acceptable considering crop load. We have not crop thinned 'McMillan' and it would probably benefit from some thinning in the 'ON' years. Trees grow vigorously and have a fairly wide canopy.

Nut quality of ‘McMillan’ is only average, with a thick shell reducing percent kernel to about 50%, and kernel color being a little dark. I usually describe ‘McMillan’ as looking like a high quality ‘Stuart’ nut. ‘McMillan’ will fill better than ‘Stuart’ and seldom has the packing material (fuzz) sticking to its kernel like ‘Stuart’. It is, however, slightly smaller than ‘Stuart’ and the kernel color is not as bright. Nut shucks are distinctive with a rough appearance. While the nut quality is not too exciting, the productiveness and scab resistance of this cultivar suggest it would be a good choice for low input plantings. I have not seen any leaf or nut scab on ‘McMillan’ in our sprayed planting, including in the wet year of 2013. Aphid damage has also not been a problem. Dr. Goff rates ‘McMillan’ as having “good” resistance, meaning it will scab in wet years without sprays, but scab is easily controlled with a minimal spray program. Harvest time of ‘McMillan’ is midseason, a couple days before ‘Desirable’ on average.

Right now, I recommend ‘McMillan’ for high scab pressure or low-spray situations. I like the productivity of this cultivar and the fact that aphid damage has been minimal so far. Nut quality is not good enough that I would not recommend it as a main cultivar in a commercially managed orchard. In general I think this is a good choice for organic plantings, and low input plantings. Standard commercial growers will probably want a higher quality nut that will bring a higher price.

'McMillan' is a protogynous cultivar with early receptivity and mid to late pollen shed. It would be pollinated by 'Desirable', ‘Caddo’, ’Cape Fear’, ‘Creek’, ‘Oconee’, 'Pawnee', 'Mandan', 'Byrd', and 'Amling'. 'Amling', or ‘Creek’ would probably be the best choice as pollinators as these cultivars also have good scab resistance.

Read more about 'McMillan' in my 2012 Pecan Grower paper.

This cultivar was introduced by Auburn University and more information can be found on this selection at the Alabama Pecan Growers website. 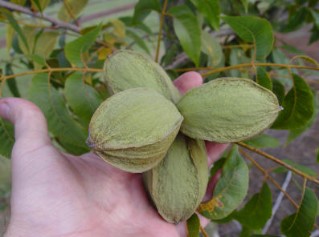 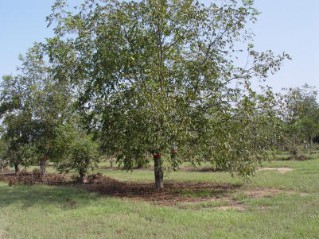 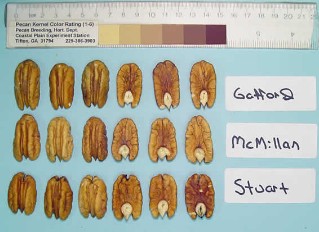 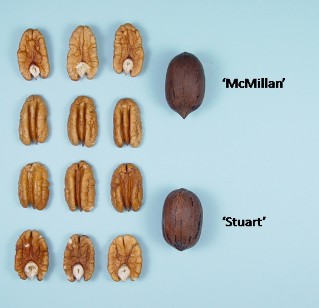