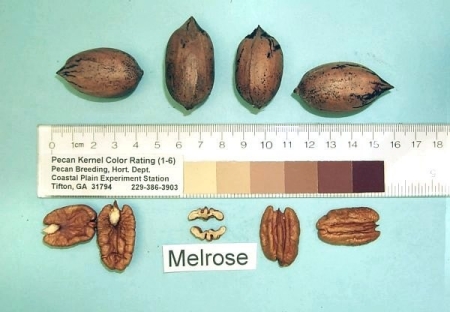 'Melrose' was released in by the Louisiana Experiment Station in 1979. It was a seedling found in Hanna, Louisiana (Young et al., 1979).

Kernel yield of young trees of 'Melrose' trees were low, while mature 'Melrose' trees had an average productivity. 'Melrose' trees had a strong tendency to alternate as trees matured, resulting in a lower nut quality. This poor quality in years of heavy crops resulted in a relatively high nuts per pound value of 66.7 even though nut volume is similar to 'Moreland'. Kernel color in 'Melrose' tends to be darker than 'Desirable' or 'Stuart', and is a drawback to this cultivar. Average harvest date was late at October 28th. Scab resistance of 'Melrose' was reported to be high in Louisiana and Alabama (Nesbitt et. al., 1997). The poor quality, late harvest, and mediocre productivity of this cultivar make it a poor choice for South Georgia.

'Melrose' production from the Ponder Variety Grove test. Each colored line represents the yearly production in pounds of nuts from an individual tree beginning the year planted.