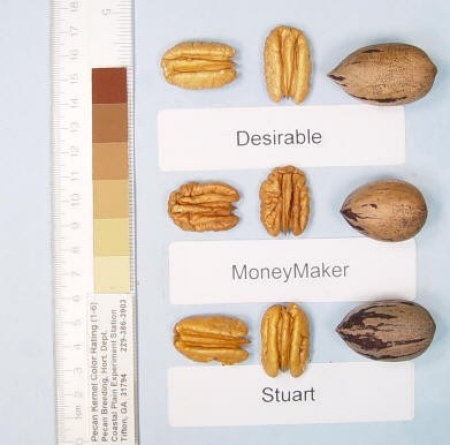 The original tree of the Moneymaker variety is was grown by Mr. S. H. James, Mound, La., from nuts planted by him about 1885.

'Moneymaker' is a controversial old cultivar with good yield, appearing among the top four yielders at age 45 and several times thereafter. This round nut has a thick shell and low percent kernel (44), but is usually well filled and has a high specific gravity. Its early maturity in the fall adapts it to the early holiday specialty market. Shellers would discount it for its low percent kernel and dark kernel color. The tree seems to be a pretty good keeper. The canopy is very open due to wide spacing of leaflets on the rachis. This allows good spray penetration. The alternate bearing cycle is pronounced and is a definite problem with this cultivar. Among older cultivars 'Moneymaker' has a very early harvest date. However, with newer cultivars like 'Pawnee' this advantage has diminished. Kernel quality is not comparable to more modern cultivars. 'Moneymaker' is not recommended but mature trees can be profitable in some situations.

'Moneymaker' production from the Old Variety Test. Each colored line represents the yearly production in pounds of nuts from an individual tree beginning the year planted.