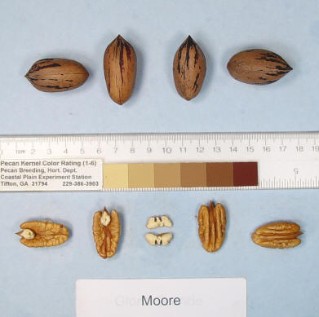 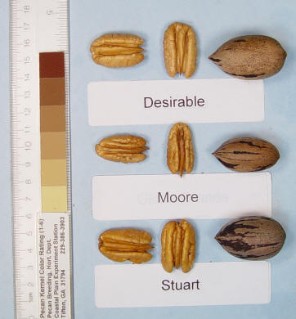 'Moore' originated in Monticello, FL. It was jointly promoted by several nurserymen in the Monticello area. Initially 'Moore' was popular in southwest Georgia and north Florida. It has been used in breeding and is the female parent of 'Barton'. (Sparks, 1992).

This is another cultivar frequently found in old plantings. It has few redeeming characteristics. The nut size is too small; kernel quality is poor; percentage kernel is low (45%); the nut is poorly filled; the tree overloads, causing shuck decline problems; and it is highly susceptible to scab. As you might guess, it's not a recommended cultivar.

'Moore' production from the Old Variety Test. Each colored line represents the yearly production in pounds of nuts from an individual tree beginning the year planted.