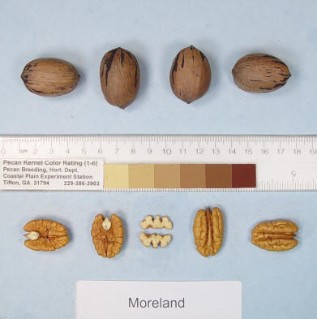 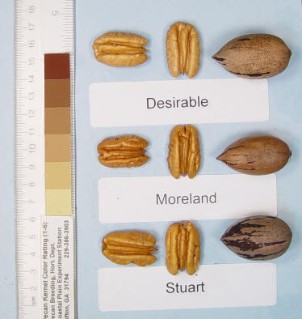 'Moreland' is an older cultivar that was discovered by Dr. W.E. Moreland from a shoot originating from below the graft of a tree in Powhatan, Louisiana in ca. 1945 (Sparks, 1992).

Moreland' has been recommended as a commercial cultivar in Florida for many years and has also been recommended in Louisiana. 'Moreland' is similar to 'Schley' in many respects and has been proposed to be a seedling of 'Schley' for this reason. Recently, DNA evidence has provided additional support for this conclusion (Conner and Wood, 2000).

'Moreland' had good yields in this test. 'Moreland' had an average precocity, producing 5.9 lbs. of kernel in the first ten years and good production as a mature tree. 'Moreland' does tend to bear alternately as a mature tree and had an alternate bearing index of 0.69. Quality of 'Moreland' was good as a young tree, with an average of about 53% kernel for years 1-10, but this declined to 50% kernel for years 11-20. 'Moreland' produces a medium sized nut at 60.5 nuts/lb. Average nut harvest was on October 24, about a week after 'Stuart'. 'Moreland' is protogynous and would be pollinated by 'Desirable', 'Pawnee', or 'Caddo'. 'Moreland' has shown exceptional resistance to scab in many locations and this is a primary reason for its recommendation in Florida (Anderson, 1999). 'Moreland' is also highly recommended in Louisiana. The tendency of 'Moreland' to alternate in production and a reduced kernel percentage as a mature tree limits its usefulness for commercial plantings in Georgia. However, in orchards where scab pressure causes large losses to more susceptible cultivars such as 'Desirable', 'Moreland' may be an alternative.

'Moore' production from the Ponder Variety Grove test. Each colored line represents the yearly production in pounds of nuts from an individual tree beginning the year planted.