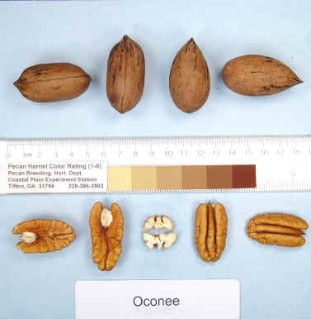 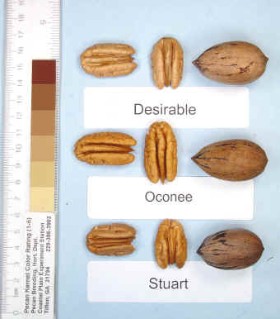 'Oconee' was selected from a 'Schley' x 'Barton' cross and was released in 1989 by the USDA and the Georgia, Louisiana, and Texas Agricultural Experiment Stations.

'Oconee' was recommended for trial plantings in Georgia in 1991 by Dr. Ray Worley (Worley and Smith, 1991). Since that time, 'Oconee' has continued to perform well in our trials and is a cultivar Georgia growers should consider using. Yields from 'Oconee' have been moderate to good for most of the testing period. 'Oconee' began bearing in the 5th year and averaged 6.7 lbs. of kernels per tree for years 1-10. 'Oconee' is not as precocious as 'Caddo' or 'Cape Fear', but has higher early yields than non-precocious cultivars like 'Gloria Grande' and 'Forkert'. This higher early kernel production is due in part to the very high percentage kernel of these early crops. In years 11-20 'Oconee' produced an average of 20 lbs. of kernels per tree. This places 'Oconee' right about in the middle in comparison to the other cultivars tested during this time. One of the biggest concerns about 'Oconee' early on was that it would begin to alternate as a mature tree. This does not appear to be the case because the alternate bearing index is 0.37, only slightly above 'Caddo' and lower than most other cultivars in this test. Lower production as a mature tree may actually be helpful as it helps ensure that the large nut is well-filled and reduces the tendency to alternate. We noticed that in our orchard that performance of 'Oconee' seemed to decline when the trees began to shade each other; therefore, 'Oconee' may need to be thinned promptly.

'Oconee' features an attractive mix of large nut size (48 nuts / lb.) and high kernel quality. 'Oconee' averaged 52.6% kernel in this test; however, if the data from a single very poor year (1996, 19th year) is removed, this increases to 55%, one of best in this test.'Oconee' also has a very high percentage (30%) of fancy kernels. 'Oconee' is an excellent sheller, producing a large percentage of intact halves. Like 'Caddo', 'Oconee' has an early harvest date, averaging around October 12. This, in combination with its large size and attractive kernels, should make 'Oconee' a profitable cultivar. We have not had trouble controlling scab on 'Oconee' in Tifton using a standard spray regimen. In Texas 'Oconee' rated as 1.8 for nut scab and 1.2 for leaf scab where 1=no disease and 5=severe disease (Thompson et al., 1994). In this same test 'Desirable' rated 2.1 for nut scab and 2.4 for leaf scab. 'Oconee' is a preferred cultivar for black aphids and will need to be monitored for a buildup of this pest.

'Oconee' production from the Ponder Variety Grove test. Each colored line represents the yearly production in pounds of nuts from an individual tree beginning the year planted.