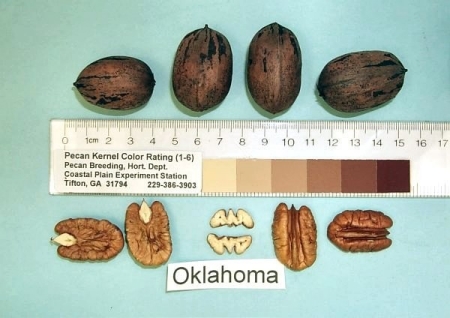 This has never been a prominent cultivar, although it is better than several of the older cultivars. Nut size and kernel quality resemble those of 'Stuart'. Pistil receptivity is extremely late; it would need to be planted with a late pollen shedder. Its major redeeming characteristic is low spreading shape and interior bearing characteristic that should adapt it well to a pruning program. Yields have been good after modern cultural practices were started. It was among the top four to five yielders at age 55 through 65. OK for an old cultivar, but its time has come and past.

'Oklahoma' production from the Old Variety Test. Each colored line represents the yearly production in pounds of nuts from an individual tree beginning the year planted.