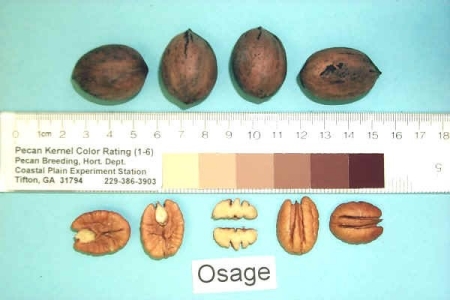 'Osage' was selected from a 'Major' x 'Evers' cross and was released in 1989 by the USDA breeding program.

This cultivar was primarily released as a early-maturity variety for the northern pecan belt. In southern Georgia 'Osage' has been a low yielding cultivar with a tendency to alternate. The nut resembles 'Elliot' in size and appearance and kernel percentage has been good for a small nut (51.1% and 80 nuts/lb.). Harvest date is very early, averaging around September 21. The small nut size and low production make this cultivar unsuitable for the Southeast.

'Osage' production from the Ponder Variety Grove Test. Each colored line represents the yearly production in pounds of nuts from an individual tree beginning the year planted.