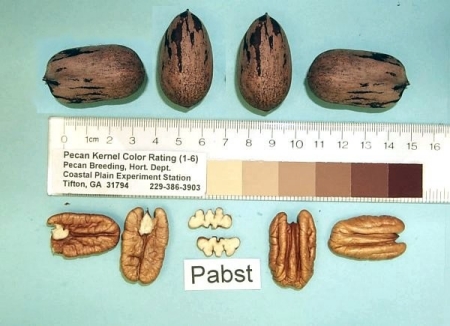 The original tree was planted by businessman Wm. B. Schmidt at his country home in Jackson County, Miss. in 1875. From this orchard was selected the 'Pabst' and 'Success' cultivars. Nurseryman C.E. Pabst selected and propagated distributed the future 'Pabst' cultivar in 1890 (Kenknight, 1970).

Yields in our orchards were second to 'Stuart' at 74 years of age. The nut is about the size of 'Stuart' with a thick shell and low percent kernel (45). Nuts are well filled and attractive for the in-shell trade. The tree has tremendous size, but it is very susceptible to scab and powdery mildew. A good old variety, nut no longer recommended.

'Pabst' production from the Old Variety Test. Each colored line represents the yearly production in pounds of nuts from an individual tree beginning the year planted.