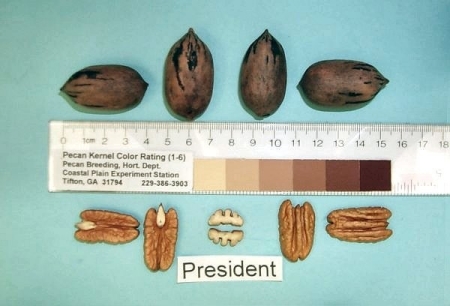 Also known as President Roosevelt. The original tree of the President was grown by Griffing Brothers of Macclenny, Fla., about 1889 from a nut obtained by them from Bagdad, Fla. The tree was sold by them in 1891 with other seedlings to a customer who planted it in Jacksonville, Fla. Its propagation was begun about 1902 (Sparks, 1992).

It has a small nut with low percent kernel. One of the trees was affected by a canker and yield was low on it. Mediocre at best, not recommended.

'President' production from the Old Variety Test. Each colored line represents the yearly production in pounds of nuts from an individual tree beginning the year planted.