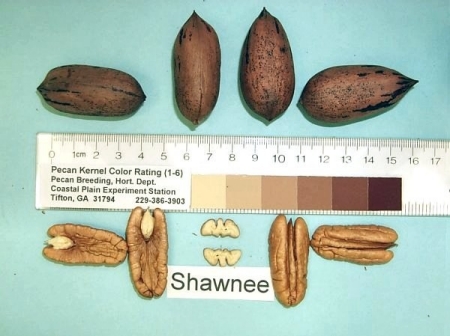 'Shawnee' was selected from a 'Schley' x 'Barton' cross and released in 1968 by the USDA.

Nut shape is similar to but larger than 'Schley'. As a young tree, this cultivar produced some nice high-quality nuts with pretty kernels. However, yields have been poor in this test because 'Shawnee' entered into an extreme alternate bearing cycle at a very young age. Percent kernel dropped markedly in mature trees in the ON years and is too low (45-50%) for such a thin-shelled nut. This cultivar is not recommended.

'Shawnee' production from the Ponder Variety Grove test. Each colored line represents the yearly production in pounds of nuts from an individual tree beginning the year planted. *Note the extreme alternate bearing cycle of these trees.