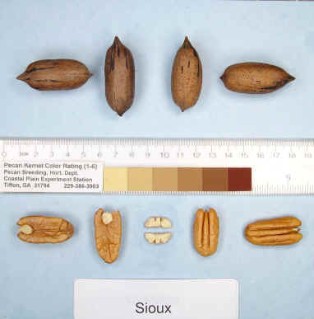 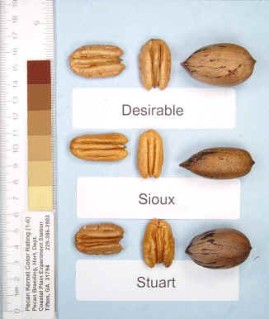 'Sioux' originated from a cross between 'Schley' and 'Carmichael' made in 1943 by L.D. Romberg. The selection first produced fruit in 1949. It was named and released in 1962 by the USDA.

'Sioux' trees are fast growing, vigorous, leafy, and have a strong structure. We have 'Sioux' on our recommended list primarily because of the high quality kernel it produces. 'Sioux' kernels are usually plump and have a bright golden kernel color, one of the lightest I have seen. As you can see from the graph below, 'Sioux' tends to bear alternately. However, even in years with a heavy crop, kernel quality has remained high. Overall percent kernel averaged 55%, with nearly all of those rated as fancy. 'Sioux' was a top yielder in terms of pounds of kernels produced in the Ponder Variety Test. Unfortunately, 'Sioux' nuts are relatively small, coming in at about 71 nuts/lb., so 'Sioux' can not compete with large nuts like 'Desirable', 'Oconee', and 'Forkert'. 'Sioux' is definitely scab susceptible, and it should receive a full season fungicide program and not be planted in high disease pressure situations. 'Sioux' should be considered in situations where a very high quality kernel is desired. However, its relatively small size would probably mean that small quantities sold on the open market would not bring the price this quality of a nut deserves.

'Sioux' production from the Ponder Variety Grove test. Each colored line represents the yearly production in pounds of nuts from an individual tree beginning the year planted. *Note the up and down of the alternate bearing cycle. 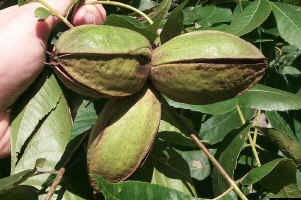 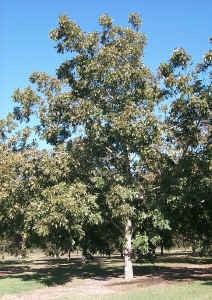