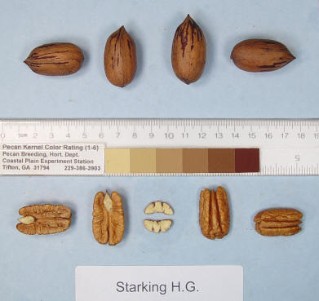 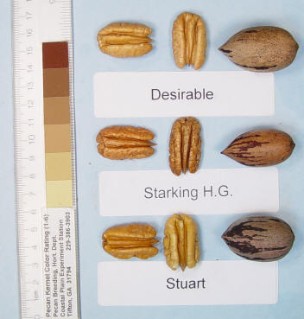 'Starking Hardy Giant' resulted from a campaign started in 1938 by George James to find the best pecan for the central Missouri district. James found what he believed to be the tree in 1947. Stark Brothers contracted for propagation, and in 1955 a patent was issued to the Stark Brothers Nursery for the tree (Sparks, 1992). It is a parent of 'Pawnee'.

It is no giant, its size is modest at best. It is the earliest maturing nut in the test, with shuck split in August, and earliness is its major redeeming quality. However, earliness and small nut size make it extremely susceptible to predatory losses. It may have a place in northern areas or for a super early market if one developed. It is not adapted to South Georgia, and many years the nuts fail to develop properly and fall off the tree.

'Starking Hardy Giant' production from the Young Variety Test. Each colored line represents the yearly production in pounds of nuts from an individual tree beginning the year planted.