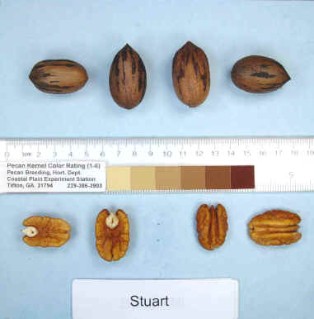 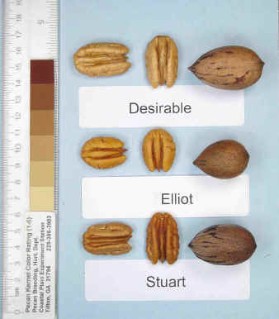 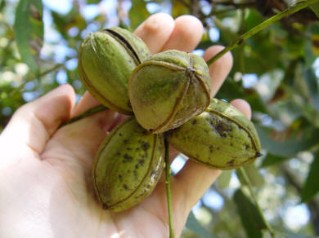 Originated from a seed planted in 1874 by J.R. Lassabe in Pascagoula from seed obtained in Mobile, Ala. The property was purchased by Capt. E. Castanera and selected one seedling which was originally known as 'Castanera'. This tree was later propagated by Col. Stuart and offered commercially in 1892 as 'Stuart'. (Perhaps the name was changed because Stuart outranked Castanera? (Kenknight, 1970)

'Stuart' is the most widely known and widely planted cultivar in the Southeast and is used as a standard to measure other cultivars. Its production in 74 years (73 lbs/tree/year, 34 lbs kernel/tree/year) far exceeds that of any other cultivar of the same age. It did not reach this status until the 65th year. One of the oldest 'Stuart' trees had the advantage of being a corner tree and the other had the advantage of being an end tree; thus, these yields are greater than one would expect had they been inside the orchard. 'Stuart' is a medium-sized nut with mediocre kernel percent (46) and kernel grade, but percent fill and specific gravity are among the highest. Yield has been excellent and consistent under modern cultural practices. The cultivar lacks precocity.

Everyone in Georgia knows the 'Stuart' pecan. I hesitate to say this cultivar is no longer recommended because it has many loyal devotees and still makes up a sizable portion of the commercial acreage. However, 'Stuart' has some important drawbacks. Overall, I feel that nut quality of 'Stuart' is marginal in most years, especially in comparison to newer cultivars. 2010 was a good example of this, Stuart had a percent kernel of 43%, while 'Zinner' with nearly the same yield was 59%. We have trouble with this cultivar not filling well, and in those cases the kernel is often dry with a fair amount of fuzz adhering to the surface. Yellow aphids like this cultivar and if they are not controlled, the honeydew builds up on leaf surfaces leading to sooty mold which seems to adhere particularly well on 'Stuart' leaves. 'Stuart' is supposed to be an early variety, but often the shucks fail to open properly, and 'Stuart' is often one of the latest varieties that we harvest. 'Stuart' is scab susceptible, but it is easier to control on scab on 'Stuart' than it is on 'Desirable'. An orchard of mature 'Stuart' trees can be profitable, but I would not recommend anyone plant more of this variety.

'Stuart' production from the Old Variety Test. Each colored line represents the yearly production in pounds of nuts from an individual tree beginning the year planted.