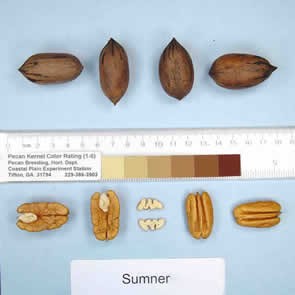 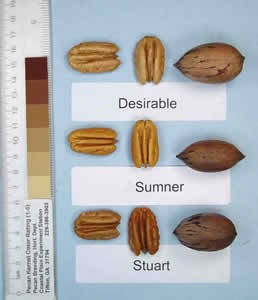 Average yield (pounds nuts per tree) of test cultivars each year from planting in 2006.

'Sumner' was a seedling discovered in Tifton, GA in ca. 1932 by Walter Sumner. Common characteristics as well as DNA evidence suggest that 'Schley' may be a parent of 'Sumner' (Conner and Wood, 2000).

'Sumner' has been included in the Coastal Plain Experimental Orchards since 1940, and was first recommended for Georgia by Dr. Ray Worley. Our data indicates that 'Sumner' is not a precocious cultivar and can in fact be somewhat slow to come into bearing. This has also been observed in Louisiana tests (O'Barr et. al., 1992). Mature tree production was about average in this group of cultivars and 'Sumner' has fairly regular production. 'Sumner' produces relatively large nuts, 54 nuts per pound, of moderate quality. Percent kernel in this test, 49.2%, is lower than the 52% that has been consistently been reported for 'Sumner' in previous tests (Anderson, 1999; Nesbitt et. al., 1997; Worley and Mullinix, 1997). 'Sumner' can overload and alternate and would benefit from crop thinning in some years. Average harvest date is late, and this is a major disadvantage of this cultivar. The data above seem to show 'Sumner' is only a little later than 'Desirable', but this data is distorted by the fact that 'Desirable' often had so much shuck scab that opening was delayed. 'Sumner' is a favorite cultivar for black pecan aphids and is typically one of the first to show damage from this pest. Historically 'Sumner' has been very resistant to scab, and this is one of the key factors in its widespread use. However, recently scab susceptibility has been reported around the state. We noted very significant scab on unsprayed 'Sumner' trees in 2013, but sprayed trees remained clean. If loss of resistance becomes widespread for this cultivar, in combination with its late maturity and susceptibility to black pecan aphids, the appeal of this cultivar would be greatly diminished. However, right not it is a favorite cultivar in Georgia.

'Sumner' production from the Ponder Variety Grove test. Each colored line represents the yearly production in pounds of nuts from an individual tree beginning the year planted. Note that tree begin alternating and would likely benefit from crop load thinning in some years.