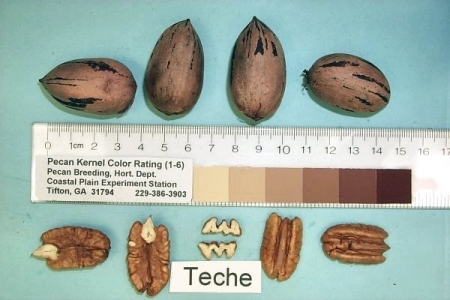 Also known as Frotscher No. 2, Duplicate Frotscher, Fake Frotscher, Spurious Frotscher (as if the real 'Frotscher' wasn't bad enough). Apparently 'Teche' is around today because it was mixed in with some graftwood of 'Frotscher' when it was disseminated in 1885 (Sparks, 1992), proving once again that sometimes it's better to be lucky than good.

'Teche' production from the Old Variety Test. Each colored line represents the yearly production in pounds of nuts from an individual tree beginning the year planted.