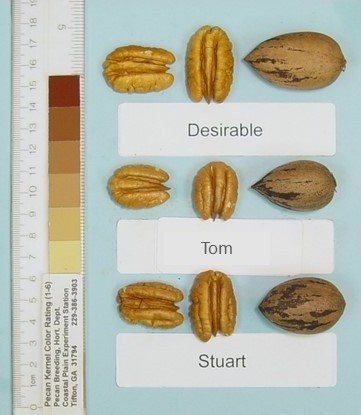 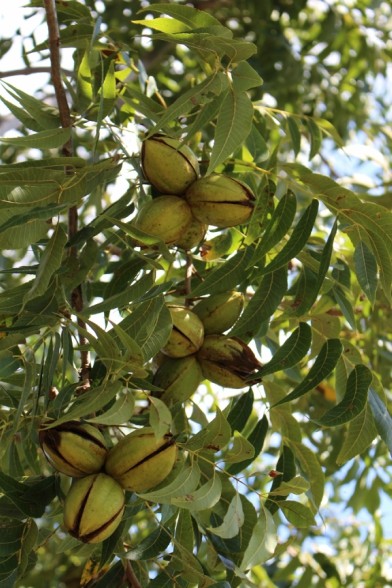 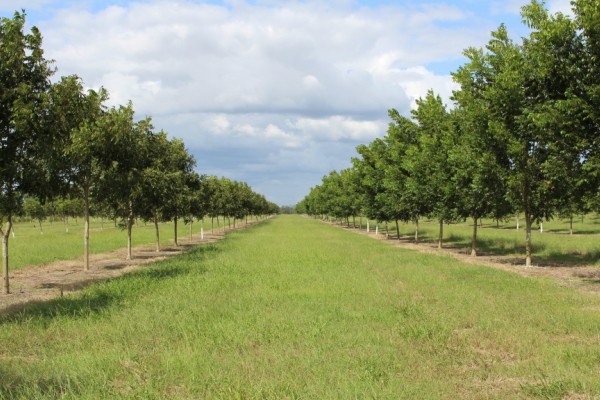 ‘Tom’ was released in 2014 by Dr. Darrell Sparks at the University of Georgia.  ‘Tom’ was originally tested as ‘Selection No. 121’ and originated from the cross ‘Wichita’ x ‘Pawnee’.

Trees of ‘Tom’ were planted in Tifton in 2014 and are not yet fruiting, so we are very early along in the testing of this cultivar.  The information provided here is from observations of ‘Tom’ in test orchards in Albany, Ga.

‘Tom’ was selected based primarily on its high production of a good quality but relatively small nut, and early harvest date.    Harvest date is very early and similar to ‘Byrd’ and ‘Treadwell’, which would be around Sept.23.  Yields on a top-worked tree indicate that ‘Tom’ may be able to bear very heavy yields with good return bloom without fruit thinning.  Grafted trees are too young to know if this trait will hold up in nursery trees.

‘Tom’ produces nuts about 58 nuts/lb and 55% kernel with good kernel color.  The primary use of ‘Tom’ nuts may be as a high-quality substitute for ‘Elliott’ in the confection trade.  In comparison to ‘Elliott’, ‘Tom’ nuts are earlier, larger, and have a higher percentage kernel.  In addition, so far ‘Tom’ trees appear to be less likely to alternate bear than ‘Elliott’ which is a severe alternate bearer.  ‘Tom’ nuts are similar in shape to ‘Elliott’, possessing a tear-drop shape with a round kernel.

Scab resistance of ‘Tom’ has been relatively good so far.  Unsprayed trees showed little scab for a few years, but have since begun to scab.  Application of fungicides currently results in good protection from scab.  However, scab resistance is not similar to ‘Elliott’ which has a long history of excellent scab resistance.

‘Tom’ trees are relatively compact in growing and growers should consider tighter spacing to increase early yields.  ‘Tom’ is a type I, protandrous, with fairly early pollen shed. It should match well with ‘Zinner’, ‘Cherryle’, ‘Lakota’, ‘Avalon’, and ‘Elliott’.

‘Tom’ is a new cultivar and we are still monitoring its yield and quality.  Early results suggest it will be a very productive cultivar producing a smaller high-quality nut suitable for the confection trade.  Nut acceptability should be similar to or better than ‘Elliott’ with the tree hopefully having a higher and more consistent production.