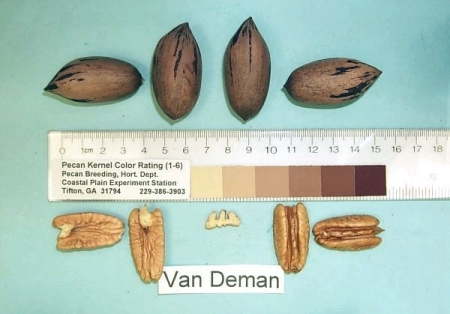 The tree is large and vigorous and produces a large, elongated, thick-shelled nut. It has been a fairly consistent bearer of good quality kernels, but the thick shell causes low percent kernel. The nut is attractive for an in-shell nut and kernels are high in oil. Shellers would not like the low percent kernel but would like the high quality kernels. One of my favorites of the older varieties. Not recommended.

'Van Deman' production from the Old Variety Test. Each colored line represents the yearly production in pounds of nuts from an individual tree beginning the year planted.