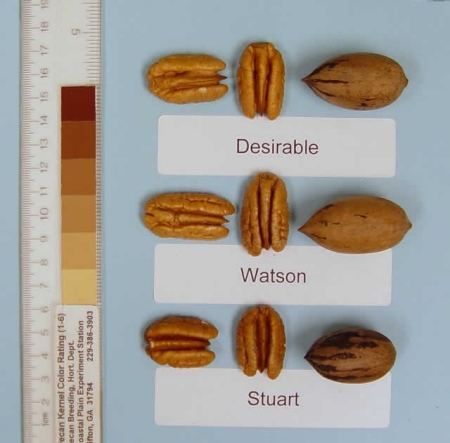 Average yield (pounds nuts per tree) of test cultivars each year from planting in 2004.

'Watson' was brought to my attention by a Georgia grower and was grafted into my cultivar trial in 2004. At first blush, the 'Watson' nut appears very similar to 'Oconee'. It is a large nut with a thin shell. The kernel is bright and attractive when fully filled. Occasionally some kernels have had spots that don't fill. Harvest is midseason, similar to 'Desirable'. This cultivar is protogynous (Type II) with early receptivity and mid to late pollen shed. It would be pollinated by 'Desirable', 'Pawnee', 'Mandan', and 'Amling'. 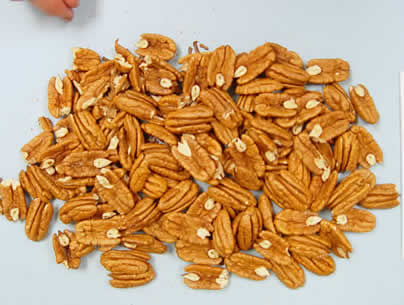 The original tree is quite large and exists in a drive area with little competition. The original tree is reported to alternate with yields of 500 lbs., 75 lbs., and 365 lbs. in 2000, 2001, and 2002. We have already seen this alternation in our planting. The trees are vigorous growers and precocious. Cluster size is often large with 3-4 nuts per cluster, which is a lot when you have a nut this large. I believe this cultivar could only be grown with crop thinning. Scab resistance was rated as good until 2013 when we saw significant scab on 'Watson'. Aphid damage has been light so far. We discontinued testing this cultivar in 2013 because of scab susceptibility and poor nut quality in the 'ON' years. While not a terrible cultivar, it just didn't seem to have enough good traits to make it worth pushing as new cultivar.