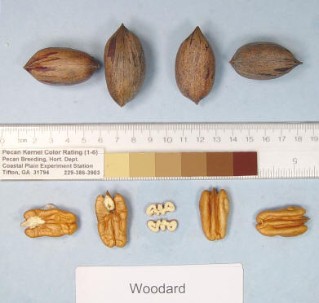 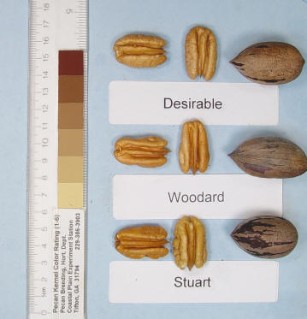 'Woodard' pecan originated in Tift County, Georgia, from a chance seedling located on a farm near Ty Ty. Mr. R.W. Patrick collected samples of the nut, and grafted trees were planted in the cultivar trials of the Experiment Station in 1955. The nut is known locally as 'GCPES Seeling 1' or 'Patrick'. There was already a cultivar known as 'Patrick' so the name was changed to 'Woodard' in honor of O.J. Woodard the late head of the Horticulture Department who propagated and tested it. The original tree was estimated to have been planted around 1900-1910 (Worley and Woodard, 1982). Molecular marker data seems to indicate that 'Woodard' and 'Desirable' are fairly closely related (Conner and Wood, 2001).

A local nut with extremely thin shell and high percent kernel (55%). It made the top five in average annual yield by the 35th year. It is a consistent yielder of high-quality nuts. Its extremely thin shell may present problems if handled roughly. It would be excellent if marketed to those who shell nuts by hand, since it is so easily cracked. It is susceptible to scab, but routine spray programs easily control the problem. Though also susceptible to powdery mildew, it suffers little damage from the mildew's presence. If it had been marketed early in the 1900's it would have been a very competitive cultivar. Today, however, it can not compete with more modern cultivars and their high kernel quality.

'Woodard' production from the Old Variety Test. Each colored line represents the yearly production in pounds of nuts from an individual tree beginning the year planted.