Quality of the nut crop produced is also highly important in determining the value of a pecan cultivar. We determine the quality of the crop of each tree in the test from 50-nut subsample, and then pool the results for the cultivar average. Nut size and percent kernel were averaged over all years in the test. Percent kernel is then broken down into three quality grades; fancy, standard, and amber. Fancy kernels were plump, well-filled kernels of the brightest color without any adherence of packing material on the kernel (fuzz). Standard kernels were similar but darker, or less plump, with slight fuzz. Amber kernels were darker than standard kernels and/or had defects. Typically, most cultivars show a drop in percent kernel as the trees age. This is because young trees are producing relatively light crops and have more than enough leaves to support the developing kernels. However, as the trees mature, they set heavier crops and become limited in their ability to fill all the nuts.

Specific gravity is the weight of the nut divided by the volume. I like to use it as another method to determine how well the kernel is developed. In some ways it is more useful than percent kernel for this. Percent kernel is influenced by nut size. A 50% kernel Elliot or other small nut will have a much better developed kernel than a 50% kernel Desirable with its large nut size. Specific gravity is less influenced by nut size. In general, a specific gravity of 0.80 is excellent, 0.75 is average, 0.70 is poor and 0.65 is terrible. 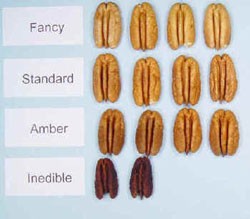 Kernal Separation Based on Color 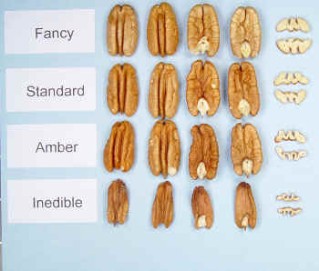 Kernal Separation Based on Fill