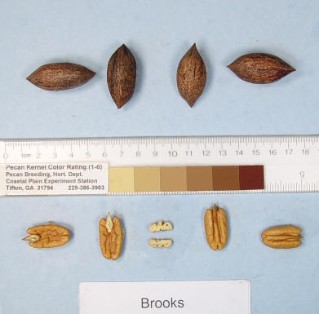 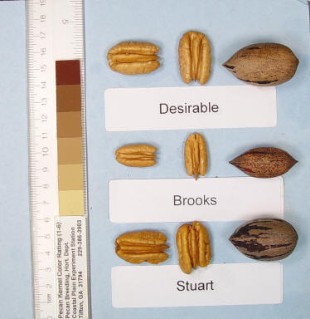 A seedling selected from Brooks County, Georgia. While never a popular cultivar, 'Brooks' distinctive shape lives on in its progeny 'Caddo' which is recommended for Georgia.

Small football-shaped nut, spreading tree, very productive. It was planted on an edge of the orchard that subjected it to loss from predators; nuts are easily carried off by birds. Strong tendency to alternate years of heavy production. Kernels are nice in that even when they aren't well filled, they shrink down and make a solid kernel. Cracks out well. Seems to have good insect resistance. The funny shape and small size kept it from ever having become popular. Not recommended.

'Brooks' production from the Old Variety Test. Each colored line represents the yearly production in pounds of nuts from an individual tree beginning the year planted.