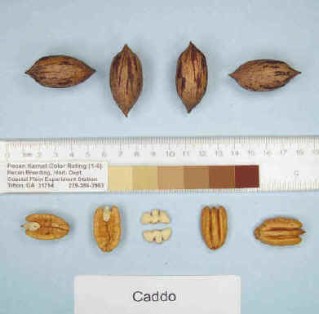 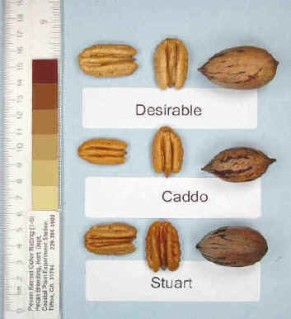 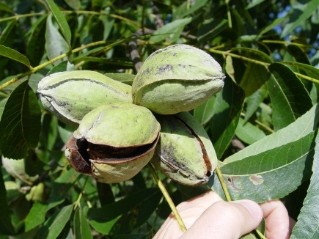 'Caddo' was developed from a cross between the cultivars 'Brooks' and 'Alley' in 1922 or 1923 at the U.S. Pecan Field Station, Philema, Georgia. This cultivar was then tested and released in 1968 from the USDA breeding program at Brownwood, Texas.

In terms of yield potential, 'Caddo' is one of the best varieties that we have tested. 'Caddo' is a precocious cultivar (begins bearing at an early age), and was one of the top producers in our test in years 1-10. However, what makes 'Caddo' a truly exciting cultivar is that production remains high in mature trees without going into an extreme alternate bearing cycle as most precocious cultivars do. 'Caddo' had the high average yield for years 11-20 and a low alternate bearing index, meaning Caddo will produce fairly consistently year in and year out.

Nut quality in 'Caddo' is quite good at 54% kernel with more than half the kernels rated as fancy. 'Caddo' has a slender kernel with an attractive gold color. Unlike many cultivars, nut quality remains high in mature trees even with the larger yields.

'Caddo' is not without limitations, however, and 'Caddo's' biggest is that it is not a large nut, averaging only 67 nuts / lb. 'Caddo' retains the characteristic football shape of 'Brooks', and this can be a disadvantage because it makes it easier for crows to pilfer the nuts. 'Caddo' is a moderately early-ripening pecan, and our average harvest date for 'Caddo' was October 11, which is a few days earlier than 'Desirable'. 'Caddo' is scab susceptible, but we have been able to control scab with a standard spray program. Resistance to scab was rated as average in Florida, and in the same test 'Cape Fear' was rated as good and 'Desirable' as poor (Anderson, 1999). You will have to spray to do it, but you should be able to control scab on 'Caddo'. We have also noticed that 'Caddo', much like 'Sumner' and 'Gloria Grande', appears to be favored by black aphids, and should be monitored for this pest.

We recommend 'Caddo' as a consistent producer of good quality kernels of medium size. 'Caddo' is protandrous, meaning the anthers mature before the stigma, and would be pollinated by 'Elliot', 'Schley', 'Kanza', and 'Stuart'.

'Caddo' production from the Ponder Variety Grove test. Each colored line represents the yearly production in pounds of nuts from an individual tree beginning the year planted. *Note the fairly regular high production with few 'Off' years.