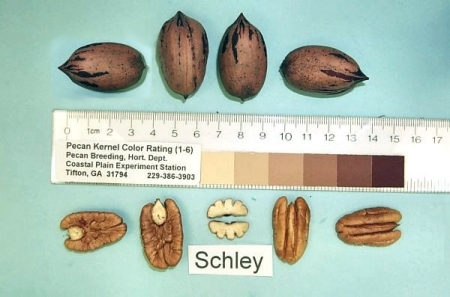 'Schley' was developed from a seedling tree planted in 1881 by Mr. A.G. Delmas, Scranton, Miss. Propagation was begun in 1900 (Sparks, 1992). 'Schley' is in the background of a large number of modern pecan cultivars including: 'Apache', 'Shawnee', 'Hopi', 'Sioux', 'Oconee', and 'Cherokee'. If 'Schley' is a parent of 'Mahan', as is suspected, then this number could easily double. 'Schley' seems to be a good parent because it gives its two key attributes to its progeny, namely a thin shell and a high percent kernel. 'Success' is perhaps the only other cultivar that appears so prominently in pecan breeding.

This cultivar is one of the founding fathers of the pecan industry in the Southeast. It is still one of the ones many natives think of when they mention high quality pecans. It was popular because the thin shell is easily cracked by hand and the kernel is usually oily and flavorful. Unfortunately the cultivar became extremely susceptible to scab and has been removed from most commercial orchards. Some growers now report that it scabs less than it used to, but this is likely because it has become somewhat rare. It is likely that it would be difficult to control scab in a large block of 'Schley'. Black aphids also seem to be a problem with this cultivar. One of the highest quality nuts (56% kernel, 27% fancy, 79% fill) in this test, but yield was low. Many nut clusters die prematurely. I don't think this cultivar is propagated much any more and it is no longer recommended. Some older trees remain in production and are profitable.

'Schley' production from the Old Variety Test. Each colored line represents the yearly production in pounds of nuts from an individual tree beginning the year planted.