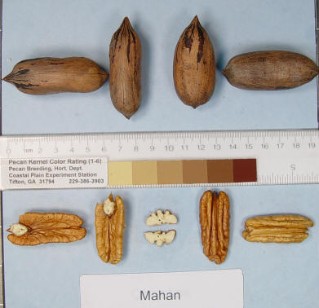 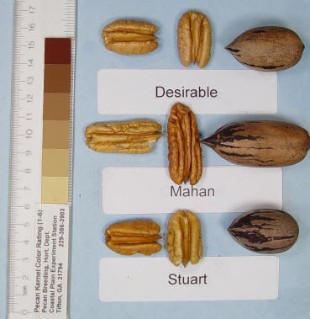 Mahan originated in Kosclusko, Attala County, Miss., from a seed planted by J.M. Chestnutt in about 1910. The parentage is unknown but it is suggested that 'Mahan' is possibly a self of 'Schley'. It has also been known as Chestnut, Florida Giant, Georgia Giant, Masterpiece, Mayhan and Misasissippi Giant (Sparks, 1992). 'Mahan' has been used extensively in breeding and eight cultivars with 'Mahan' parentage have been released: 'Choctaw', 'Kiowa', 'Mohawk', 'Pawnee', 'Tejas', 'Wichita', 'Harper' and 'Mahan-Stuart'. In addition, one open-pollinated seedling of 'Mahan', 'Maramec', has been released.

'Mahan' has one of the largest nuts. Its large nut size and thin shell give it a surprisingly high percent kernel (53%). Kernels seldom reach the end of the nut, making it one of the lowest in percent fill and specific gravity. Nut thinning might help the fill problem, but yield has been low. 'Mahan' is still sold by nurseries primarily because people request it for its large size. You might get a few good years from a young tree, but soon the nuts will no longer fill and quality will often be inedible. Homeowners should opt instead for a medium to small sized nut which has a much better chance of producing a nice kernel. Try 'Elliot' instead for its oily kernel and excellent scab resistance. If you really must have a large fruited pecan, then I would recommend 'Podsednik' or 'Kernoodle' instead.

'Mahan' production from the Old Variety Test. Each colored line represents the yearly production in pounds of nuts from an individual tree beginning the year planted.