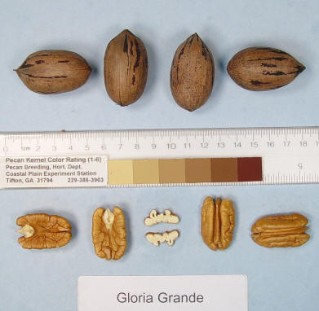 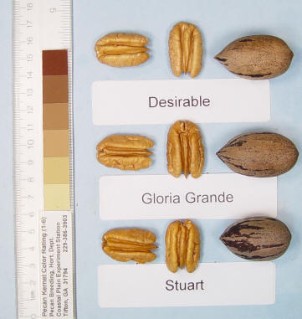 'Gloria Grande' was discovered in Elloree, S.C. by W.W. Watson, owner of Watson's Pecanwood Nurseries, Orangeburg, S.C. The cultivar was introduced by Watson in 1923. The parentage is unknown, but 'Gloria Grande' appears to be a seedling of 'Stuart' because of the many similarities of the two cultivars. The cultivar was named after Gloria Swanson, Mr. Watson's favorite actress (Sparks, 1992). 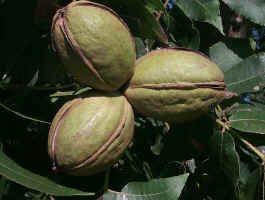 'Gloria Grande's' primary attributes are a high resistance to scab and consistent yields as a mature tree. Like 'Stuart', 'Gloria Grande' is slow to come into full production. However, as a mature tree 'Gloria Grande' produces well. 'Gloria Grande' had the lowest alternate bearing index (0.19) of any cultivar in this test, so it will produce a crop in most years. On the negative side, percent kernel has been low at 43.9%. This is partly due to the very thick shell of the nut. However, disappointing nut quality due to inadequate filling and dark colored kernels resulted in most kernels falling into the standard grade. 'Gloria Grande' also often has a problem with producing fuzzy kernels some years similar to 'Stuart'. Black aphids prefer this cultivar and it must be monitored for this pest. We do not normally recommend 'Gloria Grande' because the kernel quality is marginal for commercial orchards.

'Gloria Grande' production from the Ponder Variety Grove Test. Each colored line represents the yearly production in pounds of nuts from an individual tree beginning the year planted.