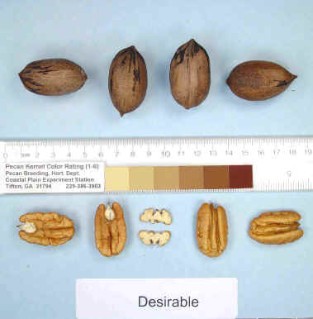 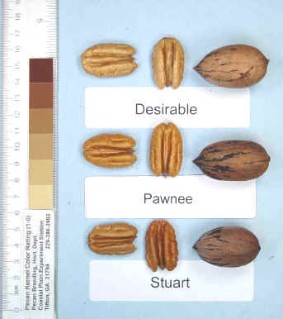 'Desirable' is supposedly one of the first pecan cultivars developed from a controlled cross. The cross was made in the early 1900's by Carl F. Forkert from Ocean Springs, Jackson County, Miss. The parentage is unknown but may be 'Success' x 'Jewett'. 'Desirable' was introduced about 1915 but was not widely disseminated prior to Forkert's death in 1928. This cultivar would probably have been lost if scions had not been sent to the U.S. Pecan Field Station, Philema, GA in 1925. It was introduced commercially in 1945 and was widely planted by the early 1960's. As of 1992, 'Desirable' was the number one cultivar planted in new orchards. It has been used in pecan breeding and two cultivars, 'Houma' and probably 'Kiowa', have been released with 'Desirable' parentage (Sparks, 1992).

'Desirable' is a well-known cultivar which sets the standard for quality in the Southeast. Large, well-filled nuts produce excellent kernels and bring top price on the market. It is an excellent sheller producing many mammoth halves. Perhaps its strongest feature is the ability to produce consistent high-quality crops year to year. 'Desirable' tends to thin its own clusters to two to three nuts each, thus lowering the stress on the tree and reducing alternate bearing. For most commercial orchards in Georgia, 'Desirable' will be the main cultivar.

'Desirable' is not without its faults. This cultivar is probably about the most scab susceptible cultivar that can still be grown in the Southeast. Scab control will take a full season of fungicide protection, and control may still be difficult in high-pressure environments. Wet years like 2013 will result in great difficulty in controlling scab, if it can be controlled at all.

Growing 'Desirable' in the Albany area and other lower south Georgia regions has become very difficult in many years due to scab pressure. In these regions growers should not plant large acreages to 'Desirable' unless they have the ability to apply frequent fungicide sprays. In mid-Georgia, scab is much easier to manage on this cultivar.

'Desirable' trees are somewhat slow growing and are more difficult than other cultivars to prune into strong trees. While well known by shellers for good quality, several new cultivars have higher percent kernel than 'Desirable'. Due to scab susceptibility, this cultivar is a terrible choice for the homeowner even though it is commonly sold at garden centers.

If I were starting an orchard today, I don't think I would plant 'Desirable'. The difficulty in controlling scab is just too great a burden, especially in south Georgia. While 'Desirable' has good nut quality, it is no longer exceptional, and many new cultivars have better quality. This is especially true when scab reduces nut quality. A big selling point of 'Desirable' is it bears every year, and this is largely true. However, crop load thinning and hedging techniques are making it easier to crop other cultivars with better traits more consistently.

'Desirable' is protandrous and is a good early season pollinator, receptivity is mid-late season. 'Elliot', 'Kanza', 'Sioux', 'Sumner', and 'Stuart' should pollinate 'Desirable'.

'Desirable' production from the Old Variety test. Each colored line represents the yearly production in pounds of nuts from an individual tree beginning the year planted. Yields in this test were low because some trees were interplanted among older trees and grew slowly. 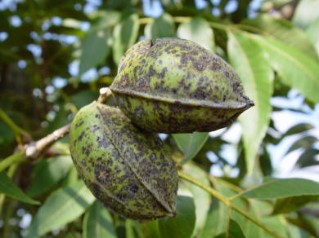 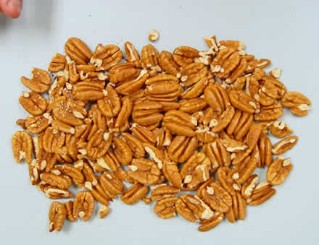