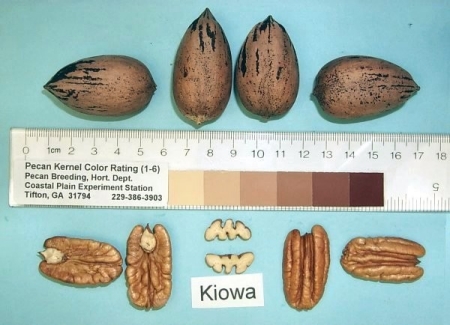 Developed from a cross of 'Mahan' x 'Odom' in Brownwood, Tx. in 1953. However, isozyme and DNA analysis rule 'Odom' out as the pollen parent and indicate the cross to more likely be 'Mahan' x 'Desirable'.

'Kiowa' produces a very large, high-quality nut. Quality in most years was good and averaged 52 percent kernel over all years in the test. However, in years with a high crop load, quality will suffer. For example, in years 15 and 19, the two highest yielding years, percent kernel dropped to 48% and 47% respectively. Kernel color is slightly dark, and not as light and attractive as 'Desirable'. Average harvest date was on October 21, about 3-4 days after 'Stuart'. Scab resistance in 'Kiowa' is variable, with some locations reporting very good resistance, and other locations reporting susceptibility similar to 'Desirable'.

Observations in our orchards indicate that 'Kiowa' may be more susceptible to mouse-ear than other cultivars, and Sparks (1992) also reported this observation. However, since this condition is now known to be due to nickel deficiency, this may not be a big issue. We have not had trouble controlling insects on 'Kiowa' in our orchards. 'Kiowa' is protogynous, the stigma is receptive before the pollen is shed. 'Kiowa' would be pollinated by 'Desirable', 'Pawnee', and 'Caddo', and would pollinate 'Pawnee', 'Forkert', and 'Desirable'.

In summary, 'Kiowa's' advantage over 'Desirable' is that it will yield heavier than 'Desirable' as a young tree and is much easier to train into a central leader than 'Desirable'. In some locations, it may also be easier to control scab on 'Kiowa'. The disadvantage of 'Kiowa' in comparison to 'Desirable' is that it tends to overbear as a mature tree, and it can be difficult to maintain a high-quality kernel in overbearing years due to its large size. Mechanical shaking during years of excessive nut set would help alleviate this problem, but the nuts are strongly attached to the stem and shaking them off is reported to be difficult. Without some form of crop thinning it will be difficult to maintain top quality with mature 'Kiowa' trees. We do not normally recommend 'Kiowa', however it can be a good cultivar in the right situation.

'Kiowa' production from the Ponder Variety Grove test. Each colored line represents the yearly production in pounds of nuts from an individual tree beginning the year planted.