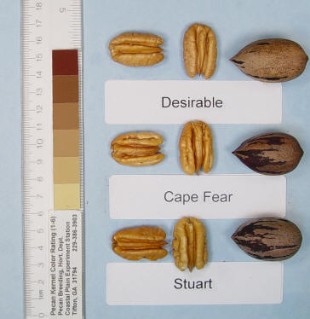 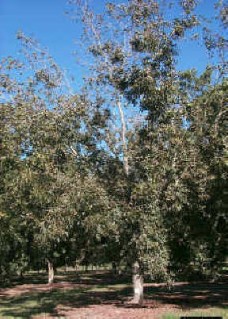 'Cape Fear' was selected from a seedling orchard grown at the Coastal Plain Research Station, at Willard N.C. by Dr. Smit of the Horticulture Dept. of North Carolina State University. 'Cape Fear' is an open-pollinated seedling of 'Schley'. (Story, J.B., 1977).

'Cape Fear' is a familiar cultivar to most growers. 'Cape Fear' is a very precocious cultivar that produced well-filled nuts with attractive golden kernels as a young tree. 'Cape Fear' was second only to 'Candy' in terms of kernel production as a young tree in the Ponder Variety Test. However, as a mature tree in years 11-20, percent kernel dropped to only 50%, with several years being unacceptably low. Trees began to bear alternately and bacterial leaf scorch has resulted in premature leaf drop in some years. A strong plus for 'Cape Fear' is good resistance to pecan scab in most locations (Anderson et al., 1999). However, I have seen locations where 'Cape Fear' scabs as bad as 'Desirable', so 'Cape Fear's' resistance may be overcome in some locations. This cultivar appears to be good as a temporary tree, but we have had difficulty in getting consistently good nut quality in mature trees. Interestingly, in a separate orchard where selective limb pruning is used to hold trees mature trees in a 40 ft x 50 ft spacing, nut quality on mature 'Cape Fear' trees remained high. 'Cape Fear' is not a bad cultivar, especially if summer shaking is employed to thin excessive crops. However, the strong tendency to alternate in combination with the growing prevalence of bacterial leaf scorch (Sanderlin, 2004) has led us to no longer recommend it for Georgia. However, this is a cultivar that might be considered by growers in need of a more scab resistant cultivar and who are willing to manage crop load.

'Cape Fear' production from the Ponder Variety Grove test. Each colored line represents the yearly production in pounds of nuts from an individual tree beginning the year planted.