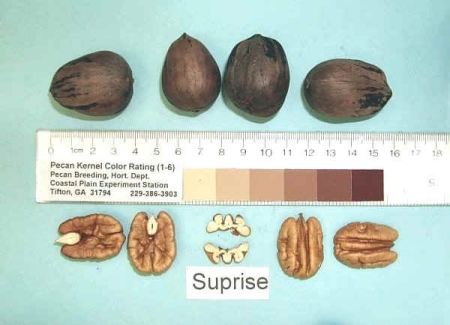 This cultivar is hard for us to rate because it was inserted into the Ponder Variety Test after the test was begun. Early results for us have been disappointing. Yields have been low, and quality marginal. We have had trouble with fuzz adhering to the kernel and color being too dark. Much like 'Shoshoni' we find that the round kernel is often cup shaped (possum bellied). 'Surprize' is reported to have moderate levels of scab resistance in Alabama, similar to 'Stuart' or 'Forkert'. The trees are generally strong, and survived hurricane Ivan relatively well. In Alabama, trees appear to be relatively consistent in cropping and don't tend to overload. We are still testing this cultivar, but I doubt the kernel quality will warrant its recommendation. It probably does better in heavier soils with more water holding capacity than we have in our test.

'Surprize' production from the Ponder Variety Grove test. Each colored line represents the yearly production in pounds of nuts from an individual tree beginning the year planted.