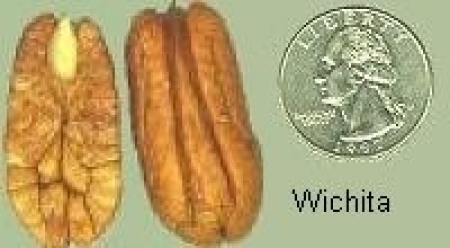 'Wichita' is a selection from a cross between 'Halbert' and 'Mahan' made in 1940 by L.D. Romberg at the Pecan Field Station in Brownwood, TX. In 1949, scion wood from this selection was distributed to growers for trial studies. It was named and released by Romberg in 1959 (Sparks, 1992).

'Wichita' is one of the most widely planted USDA cultivars. When grown under suitable conditions, it has proven to be an outstanding cultivar as a young tree. Nuts are medium-sized with high percent kernel and good fill. The extreme susceptibility to scab and water-stage split condemn it for use in the Southeast. Our results are probably better than could be expected in solid plantings of 'Wichita', because scab pressure was less. This cultivar has been disastrous for most growers in the East.

'Wichita' production from the Young Variety Test. Each colored line represents the yearly production in pounds of nuts from an individual tree beginning the year planted.