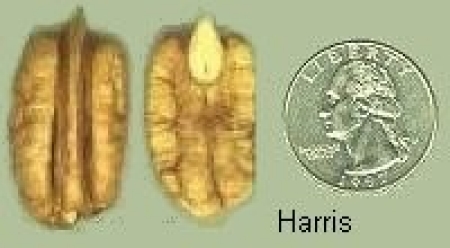 Harris Super originated in Gunnison, Miss. The original tree was discovered in 1958 in a commercial orchard by Edward Harris. It was growing next to the stump of a 'Stuart' tree. This, and the nut's similarity to 'Schley', let to the proposal that 'Harris Super' was a natural cross of 'Stuart' x 'Schley'. Isozyme evidence later indicated this was not the case. The cultivar was introduced in 1960 and was patented by Simpson Nursery Company, Monticello, Fla. in 1961 (Sparks, 1992).

'Harris Super' production from the Young Variety Test. Each colored line represents the yearly production in pounds of nuts from an individual tree beginning the year planted.