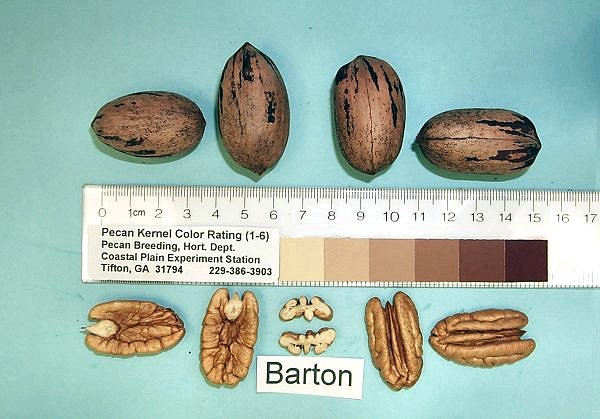 'Barton' is a selection from a cross between 'Moore' and 'Success'. The cross was made in 1937 by L.D. Romberg in the orchard of John Barton, Sr. in Utley, TX. Romberg released Barton in 1953. This was the first cultivar released by the USDA. Barton has been used in breeding and is the male parent of 'Oconee' and 'Shawnee'. There seems to be another 'Barton' in Louisiana that might be different from the one tested here.

'Barton' produces a large nut, with bright kernel that matures early in the season. 'Barton' also seems to have one of the highest levels of scab resistance I have seen. Unfortunately, as you can see from the graph below, it bears alternately. Quality on the ON year is terrible, and often the kernels are not salvageable. I'm not sure mechanical shaking would help, because even in light crop years the quality is seldom very good. This variety is not recommended for any uses. We are, however, using this cultivar in the breeding program to introduce scab resistance, tree vigor, and early maturity into our crosses.

'Barton' production from the Old Variety Test. Each colored line represents the yearly production in pounds of nuts from an individual tree beginning the year planted.