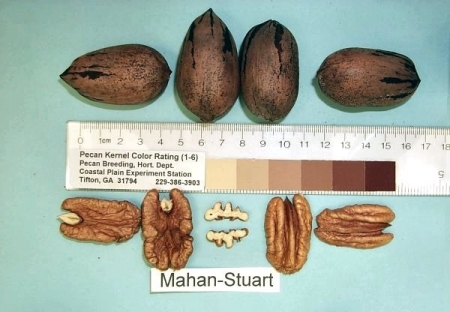 It's hard to say enough bad about this cultivar. This nut combines the worst qualities of 'Mahan' and 'Stuart', producing an extremely large, poorly filled nut with an ugly, low-quality kernel. Nuts are also susceptible to the water-stage split. On the positive side, the nuts would make attractive fishing bobbers. Those looking for a super big pecan should try 'Kernoodle' or 'Podsednik'.

'Mahan Stuart' production from the Young Variety Test. Each colored line represents the yearly production in pounds of nuts from an individual tree beginning the year planted.